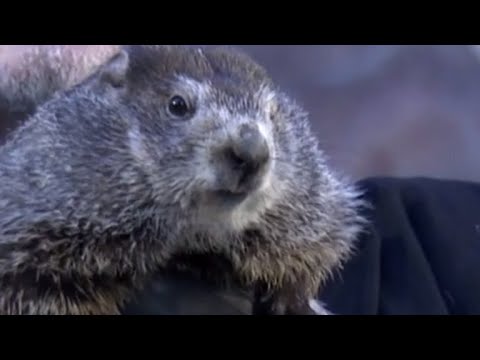 Before most people had even had the chance to ask, "What does Dilly Dilly mean?", Bud Light's nonsensical new commercial catchphrase had already seeped into much of current moment in popular culture. Dilly Dilly is everywhere -- from residential light displays to Super Bowl prop bets, especially with the big game just days away. Now, it looks like Dilly Dilly may have even infiltrated the time-honored tradition of Groundhog Day. Really.

As hundreds of people stood gathered in the bitter cold early on Friday morning, Punxsutawney Phil emerged and saw his shadow, thus predicting six more weeks of winter weather. And while the crowd chanted "Phil! Phil! Phil!" as the beloved rodent appeared, officials at the ceremony also appeared to lead the masses in a call-and-response chant of "Dilly Dilly" in the moments after officially announcing his winter forecast.

Here's how it went down:

"My faithful followers, your hands and my paws are getting cold," said Jeff Lundy, vice president of the Punxsutawney Groundhog Club's Inner Circle, as he read from Phil's official forecast scroll. "So here is my forecast, not lead but solid gold. I see my royal shadow, six more weeks of winter to go."

Then, as you can see around the 5:20 mark in the video above, Lundy can be heard chanting, "Dilly Dilly! Dilly Dilly!" with the crowd. It was as if the whole scene were ripped from a Bud Light commercial, medieval scrolls and all.

Whether Lundy was actually referring to the pervasive Bud Light catchphrase is unclear, but it's certainly what it sounded like he was saying. However, it's worth pointing out that earlier in the ceremony, he introduced President of the Groundhog Club and former groundhog handler, Bill Deeley, with a similar chant. Yes, Deeley. There's a good chance he was exclaiming, "Deeley Deeley!"

Dilly or Deeley, the cadence of the chant was unmistakable.

Tony Merevick is Senior News Editor at Thrillist and, uh, DILLY DILLY! Send news tips to news@thrillist.com and follow him on Twitter @tonymerevick.
Thrillist TV
History of
Our Newsletter