'Dilly Dilly' Has Even Infiltrated the New York Stock Exchange 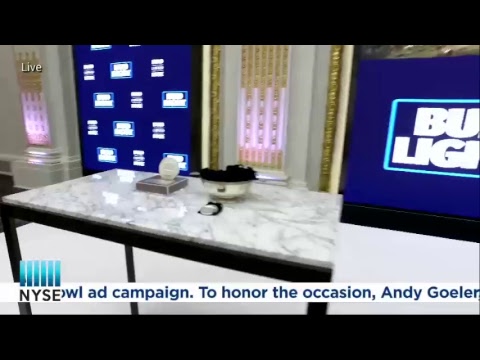 Before anyone even had a chance to stop and wonder, "What does Dilly Dilly mean?," Bud Light's objectively silly commercial catchphrase quickly spilled out of sports bars and into everyday culture -- to the point that it's nearly inescapable in the lead up to Super Bowl LII. The phrase has appeared in light displays, the official Groundhog Day ceremony, and big game prop bets. Now, Dilly Dilly has even infiltrated the New York Stock Exchange. Really.

Anheuser-Busch InBev, Bud Light's parent company, took over the NYSE on Friday to celebrate the success of the increasingly popular marketing campaign and the final installment of its Dilly Dilly commercial trilogy for the Super Bowl. As you can see in video of the brief celebration (shown above), executives from the beer giant as well as costumed actors from Dilly Dilly commercials, gathered with beer, swords, and other medieval props on the stock exchange's iconic balcony to ring in the end of the trading day. Bud Light Vice President of Marketing Andy Goeler even got to ring the Closing Bell.

"The phrase has taken on a life and a meaning of its own, thanks to fans of the commercials -- and we're more than happy to just be along for the ride," Goeler previously told Thrillist. That ride appears to be poised to culminate during the Super Bowl, but peak Dilly Dilly will likely do little to slow the ever-foaming wave of Dillys across America and beyond. Just on Sunday, a Philadelphia deli went so far as to troll Bud Light via pointed imitation with a "Deli Deli' promotion. "Philly Philly" has also emerged as a popular chant among Philadelphia Eagles fans.

Where the Dilly Dilly spreads from here is unknown. But at least one thing is increasingly clear: we'd all better get used to it.

Tony Merevick is Senior News Editor at Thrillist and cannot believe his eyes. Send news tips to news@thrillist.com and follow him on Twitter @tonymerevick.
Thrillist TV
Wine and Cheeseburger
Our Newsletter