Dog Tries to Chase Deer Away From Yard, Is Chased by Deer in Yard 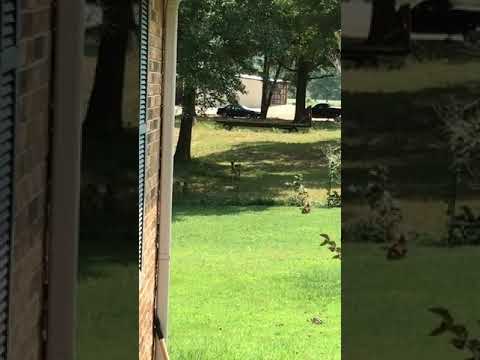 When we domesticated wolves millennia ago, we did so because we admired their courage, their handsome coats, and their affinity for belly-rubs. But of all the merits of the canine, their capacity to function in the world while having absolutely no idea what's going is maybe the most admirable. Whether it's their ignorance of why the ocean is filling the hole they just dug or what thunder even is, dogs do not get it. And this is a very good thing.

But endemic in the dog community is a grave misunderstanding that is as perilous as it is charming: the small pup who thinks that he's a big pup. Consider the video above. In it, a small but sturdy beagle is under the impression that he poses some sort of viable threat to a deer. He tries to use his size (which he does not have) and his bark to intimidate the woodland creature into leaving his property.

But he's just not a big dog. The deer accepts the situation for a bit. But at 20 seconds in, something changes. It's hard to say what it is, but you can tell the deer has had enough.

It bounds over the fence and into the dog's yard. The chase takes them behind a wall. It's unclear what a deer could actually do to a dog, but there are definitely some unhappy sounds. At this point, the man filming steps in. The deer runs away a bit, looking indignant.

It's unlikely that the dog learned anything from this, which, frankly, we admire.

James Chrisman is a News Writer at Thrillist. Send news tips to news@thrillist.com and follow him on Twitter @james_chrisman2.