The Flaky History of McDonald's Filet-O-Fish

You can literally thank Jesus for the McDonald’s Filet-O-Fish you know and love. 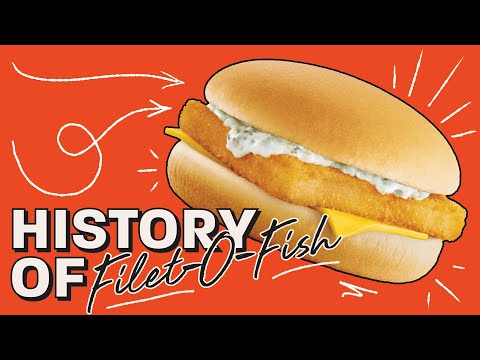 The McDonald’s menu is always changing, but there are some items that are forever. Chicken McNuggets, Big Macs, and the Filet-O-Fish are just a few items that McDonald’s fans can expect to stay. The latter menu item is highly divisive among McDonald’s frequenters: some love it, some think it’s disgusting. Regardless, it’s held its own on the McDonald’s menu for almost 60 years and its history is an interesting one that has a little something to do with the man upstairs.

Before we can talk exclusively about the Filet-O-Fish, we’ve got to take a little stroll down memory lane and stop at the first McDonald’s. Dick and Mac McDonald open McDonald’s Favorite BBQ on May 15, 1940. Business is booming, but in 1948 they decide to scale back to just burgers and fries. They implement a Ford-style assembly line as they grew and grew in popularity.

Then, in 1958, a young restaurant manager named Lou Groen is strolling along, minding his own business when he happens upon an ad for McDonald’s franchise opportunities. He buys one for a few hundred bucks on the Ohio/Kentucky border and opens for business. A few years later, under the guidance of Ray Kroc, McDonald’s rebrands with the Golden Arches we all know today. Unfortunately for Groen, sales at his McDonald’s franchise aren’t going well.

Groen only has three employees: himself, his wife, and a guy named George. What’s more, he’s on the verge of going belly up. The problem, it seems, is that McDonald’s is focusing on burgers and fries at the time and most of the people in his area are Catholic. This means during Lent they don’t eat meat and more hardcore Catholics avoid it every Friday of the year. Apparently people took this seriously at the time. Like way more seriously than your grandma, who you probably grew up thinking was a real stickler about the whole thing.

By March 1962, Groen knows he’s got to do something to save his business. Lent is coming and the customers are not. He notices the Big Boy down the street starts selling fish sandwiches instead of burgers to devout patrons and it seems to be working. So, Groen hits the kitchen and starts frying up some fish. He plays with combinations of fish, tartar sauce and McDonald’s signature buns and before you know it the Filet-O-Fish is born.

People absolutely love it, so Groen decides to bring it to the big guys at McDonald’s for approval. Initially, they’re not about it. For one, they don’t want McDonald’s stores stinking like fish. If you’ve ever worked in an open office, you get this gripe. What’s more, they’re working on a meatless burger of their own at the time and don’t want Groen stepping on their toes. Coincidence? Probably. Around the same time Groen was struggling to get folks in his area to come to McDonald’s, the company notices that Roman Catholics all over the country aren’t coming in to the eatery during Lent.

Kroc pitched the idea of going meatless, but fish wasn’t first on his list. He suggests pineapple instead of all-beef patties, which is quite the jump. He pitches the sandwich, dubbed the Hula Burger: a thick slice of pineapple grilled to perfection beneath a slice of American cheese between two plain buns. It sounds horrible, but Kroc was really committed to the idea. He also saw some potential in Lou’s fried fish, though, so he made him a deal:

The fight comes on Good Friday in 1962. At select McDonald’s locations around the country, the two meatless burgers are pitted against one another. Groen sold 350 sandwiches. Kroc sold six. The winner is clear, and in 1965, McDonald’s names the fish sandwich the Filet-O-Fish. It’s the first new item to be added to the McDonald’s menu and it’s a hit. Catholics and fast food fish-fanatics alike are enamored with the sandwich and it sells millions.

Over the next 50 or so years, other fast food chains start popping up with fish sandwiches of their own. McDonald’s sandwich continues to reign supreme, though. McDonald’s isn’t shook, but does try to keep things fresh by introducing a fish nugget. That doesn’t last long.

To this day McDonald’s sells hundreds of millions of Filet-O-Fish sandwiches every year. That’s a whole lotta fish. We may never agree on whether or not the Filet-O-Fish is, in fact, delish, but the sales numbers don’t lie.

Caitlyn Hitt is Daria IRL. Don't take our word for it -- find her on Twitter @nyltiaccc.
Thrillist TV
Wine and Cheeseburger