There's no shame in packing on a few pounds during the winter. It's cold, and hey, no one's going to see you in a bathing suit for a while, right? 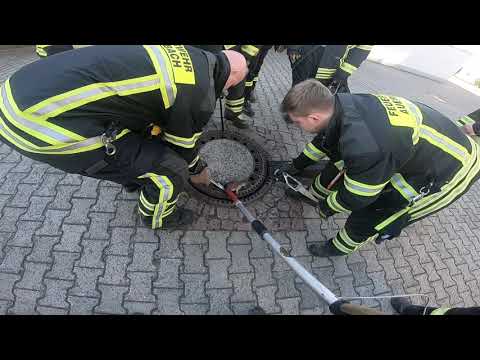 There's no shame in packing on a few pounds during the winter. It's cold, and hey, no one's going to see you in a bathing suit for a while, right? However, one jolly ol' rat in Germany is probably wishing she hadn't fattened up quite so much this season after her chubby midsection left her stuck inside a manhole cover, and a whopping nine rescue personnel were deployed to help get her free.

In the German town of Bensheim on Sunday, a team of rescue workers responded to a rather strange call from a concerned little girl who noticed a cute but chunky rat was stuck inside the bolthole of a manhole cover in the middle of the street. A crew of nine people showed up, including eight volunteer firefighters and an animal rescue official, to assess the situation, and figure the best way to liberate the not-so-little rodent.

"She had a lot of winter flab and was stuck fast at her hip -- there was no going forward or back," animal rescuer Michael Sehr told local media outlets, according to the BBC. "Even animals that are hated by many deserve respect."

In a video captured from one of the firefighter's helmets (shown above), you can see the rat struggling to try and free itself, visibly overwhelmed by all the sudden attention from uniformed men huddled around her. Then, they remove the manhole cover and reveal her feet adorably squirming on the other side as she screeches. Eventually, they manage to carefully pluck her from the hole using a special long-handled instrument, and carefully place her back inside the manhole, seemingly unharmed.

A collection of photos from the delicate retrieval uploaded to a local animal rescue service's Facebook page has since been lit up with likes and comments, with many praising the crew who thoughtfully tended to an animal many of us aren't too fond of.

Let's just hope she doesn't get get too curious and try to squeeze her way into any ATMs.