There really is nothing worse than unexpected company when you're not in the mood. So, imagine the agony of having 200 uninvited and very confused guests just show up at your house one night... 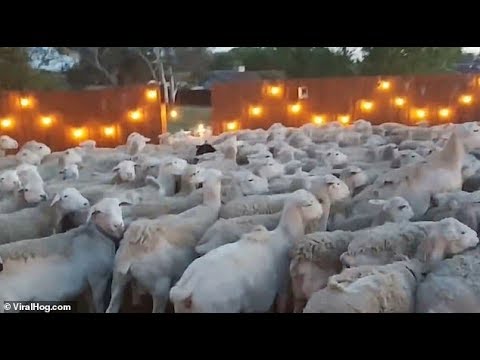 There really is nothing worse than unexpected company when you're not in the mood. So, imagine having 200 uninvited and very confused guests just show up at your house one night. That's what happened to a man in California, who found a massive flock of sheep in his backyard after leaving his fence gate open.

Luckily for us all, he knew exactly what to do in such a situation: get it all on video.

Scott Russo, who lives with his family in Lincoln, California, is accustomed to sheep grazing behind his house pretty regularly, since they're brought in by the local city government to help clear overgrowth in an effort to curb wildfires. Earlier this week, he opened his backyard gate so his young daughters could get a closer look at the animals, but made a critical error by neglecting to shut it behind him. That's when the flock got curious, and herded into his modest yard.

“They quickly shuffled in and before we knew it, in the blink of an eye, there were hundreds in here and we just didn’t know what to do,” said Russo's wife, Erin, in an interview with local affiliate CBS13.

As soon as Scott's hilarious footage starts, the situation is way out of control. The sheep are in absolutely no rush to leave and he has no idea how to convince them to do so. He repeatedly pleads with them to get "outta the yard" and they seem to be headed back out for a moment, but begin moving even further in towards his kids' trampoline and see-saw. At one point, even more start pouring in.

Eventually, Scott braves the herd and exits his yard in hopes of coaxing the sheep to do the same, and some of them do slowly follow his lead. To speed up the process, Erin starts making noise and jumping on the trampoline, presumably to scare them away. As the last of the sheep file out, Scott quickly shuts the fence door, and the video cuts.

The whole saga is absolutely worth a watch, if only for Scott's exasperated narration.

Something tells us the Russo's back fence gate is a permanently closed one from now on.