It's not guaranteed that if you visit Florida, you're going to encounter an alligator. But let's just say that if you're looking for a weird gator story, you don't need to look for long to find one in the Sunshine State... 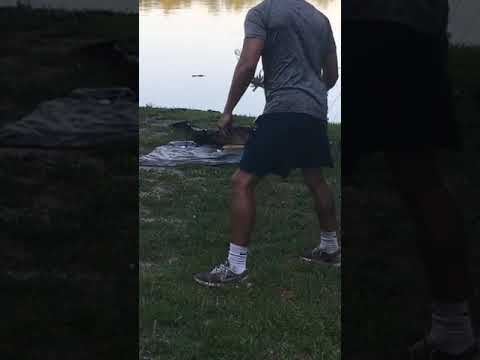 It's not guaranteed that if you visit Florida, you're going to encounter an alligator. But let's just say that if you're looking for a weird gator story, you don't need to look for long in the Sunshine State. The latest occurred this past week, when a couple went out for a romantic picnic, only to be interrupted by one hungry, razor-toothed reptile that made off with most of their food, including an entire bowl of guacamole.

While out for a picnic date by Lake Alice in Gainesville, Florida late last week, Trevor Walters and his fiancé Taylor Forte were in the middle of enjoying a spread of snacks they'd prepared, when a curious and clearly hungry gator crashed the party. It had no qualms making its interest in their food known, according to the couple, who recounted the event for local outlet 4 News.

“He swims up to the bank and just looks us dead in the eyes and then he immediately just sprints up onto the beach,” Walters said. Understandably, they booked it off their blanket in a blink.

The couple wisely watched the gator from afar and managed to get a video (shown above) of the action, too.

"He annihilated an entire block of cheese,” Walters said. “Gobbled it down, lickity split. The salami didn’t stand a chance." That evidently wasn't enough, though. It eventually went in for the big bowl of freshly made guacamole they'd brought with them, and put the entire thing in its mouth.

Though the gator felt bold enough to approach humans (likely because it had been fed by humans before, according to wildlife experts), the couple eventually got the nerve to try and scare it away. Walters described their attempt as something like a "bear scare," which involves making yourself big and making a lot of noise. The move worked, and the gator retreated back into the water.

Of course, rudely interrupting someone's picnic by swiping all their food is a dick move, but can you really blame the gator? When was the last time you saw a bowl of fresh guac and didn't do your best to house the whole thing?