Everyone Gets Free Taco Bell Today. Here's When & How to Get Yours

This time, you can thank the Milwaukee Bucks for the free food.

Today is a great day to throw out your lunch plans. That's because everyone in America gets free Taco Bell, all thanks to basketball. More specifically, you can thank the Milwaukee Bucks for overcoming an 18-point deficit at halftime of Game 6 of the NBA Finals and going on to defeat the Phoenix Suns. The big win earned them the championship title and triggered the fast food chain's nationwide deal for free tacos. It's a victory you can celebrate regardless of which team you supported.

When and How to Get Free Taco Bell Today

Unlike the previous Taco Bell giveaways tied to the NBA finals, which only lasted for a few hours, you're getting ample time to go out and get your hands on the free food. All you have to do is head to your nearest T-Bell any time during the normal store hours on Thursday, July 22, and they'll present you with a free Flamin' Hot Doritos Locos Taco. You can redeem the offer via the chain's website, mobile app, or even the in-restaurant kiosks, though if you order at the drive-thru or the register, you'll be able to choose a Nacho Cheese Doritos Locos Taco, a Crunchy Taco, or a Soft Taco instead of the standard Flamin' Hot Doritos Locos Taco. You don't need to bring a coupon or buy anything to get in on the feeding frenzy, but admit it, chances are you'll leave with at least an order of Nacho Fries, now that they're back on the menu.

Taco Bell made the deal even sweeter for those who are part of the Taco Bell Rewards loyalty program. Members received early access to the free tacos all day on Wednesday, July 21, according to a spokesperson for the chain.

Just keep in mind that the promotion is limited to one free taco per person, so it'll be more of a snack than a whole meal. There's also a chance that Taco Bell locations will run out of the freebies before the day's up, so you may want to get there sooner rather than later, especially now that the company is dealing with supply issues for some ingredients. 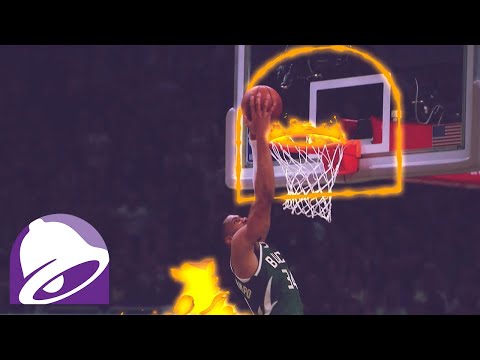 Celebrating the NBA Finals with free food is kind of Taco Bell's thing. Up until 2020, when the chain skipped the giveaway due to the COVID-19 pandemic, the annual promotion was dubbed "Steal a Game, Steal a Taco" and offered customers a complimentary Doritos Locos Taco in the (likely) event that the traveling team won on the home team's court. As you may recall, the Golden State Warriors won everyone free tacos every year of the promotion since it launched in 2016, making them America's undisputed taco champions. Until now.

The taco champion title now belongs to the Bucks, the first team to earn us the goods with Taco Bell's new "NBA Comebacks" promotion, which, like "Steal a Game, Steal a Taco" before it, gives us all the chance to win a DLT in celebration of basketball. If a team comes back from a score deficit after the halftime mark and wins the game, the deal is triggered. Taco Bell claims this actually makes the giveaway even more likely to happen than before. Congrats on making it happen, Bucks. Oh, and that whole national championship title thing, too!

“We're thrilled to reignite our partnership with the league and spice up the NBA Finals even more by giving fans the chance to score a free taco regardless of which jersey they’re wearing,” Taco Bell’s Chief Global Brand Officer, Nikki Lawson, said in a press release. “The power of comebacks resonates more than ever, not only because we are turning the heat up in our kitchen to bring back the fan-favorite Flamin’ Hot Doritos Locos Tacos, but consumers are now able to enjoy this year’s NBA Finals even more whether they’re at home, in the arena, or elsewhere.”

The Crunchwrap purveyor also tends to stage a similar free food stunt during the MLB's World Series games by giving everyone tacos upon the first stolen base, so keep an eye out for that later this year.

The Return of the Flamin' Hot Doritos Locos Taco

The nationwide free food party actually marks the much-anticipated return of Taco Bell's Flamin' Hot Doritos Locos Taco, which hasn't been on the menu since it last appeared in April of 2020. You may have guessed this by now, but the taco shell comes dusted with the same salty and spicy Flamin' Hot flavoring you know from the wide variety of Flamin' Hot snacks on the market. Inside, you get seasoned beef, lettuce, and cheese.

Unfortunately, it'll only be back for a little while, meaning the regular DLT will stand alone again (the Fiery and Cool Ranch DLTs were discontinued in 2019) not too long from now. So, be sure to get 'em while they're here. And, in the case of today, free.

Here's our huuuuuuuge running list of all the free food you can get right now, as well as the best pizza deals, reward programs, birthday freebies, gift card offers, food delivery offers, alcohol delivery deals, and perks for getting your vaccination against COVID-19. If you want a little more than, say a free taco, we also have you covered with a long list of meals you can get at fast food chains under $5. You're welcome.