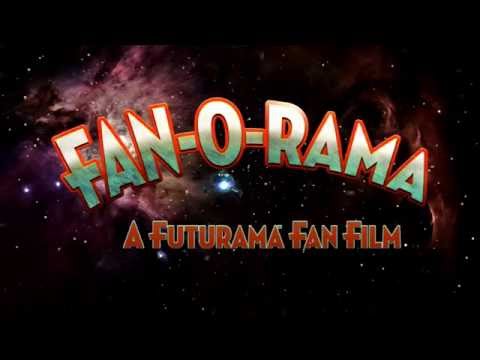 Although you've probably seen way more late night reruns of Futurama than you'd care to admit, there's a real good chance you've never seen the popular sci-fi show quite like how it looks in an upcoming live-action movie created by fans. But thanks to a new trailer for the film, now you can.

The film, fittingly titled FAN-O-RAMA, brings the beloved show about a delivery boy, cyclops, and robot to life in perfect pastel-colored live action with actors, special effects, and what we're assuming to be a crapload of makeup. According to the movie's website, the feature film-quality production was launched by a group of "highly talented" diehard fans at Cinema Relics Productions as a homage to their favorite show, which as you may know, ended in late 2013.

As Gizmodo's io9 blog rightly points out, the film's real-life recreations of the cartoon characters are so impressively realistic that they're, well, borderline creepy. Not convinced? Play the clip again and take a closer look at Leela’s lone eye and just the generally gross look of Professor Farnsworth. Regardless of how you feel about them, you have to admit they look pretty damn spot-on -- especially Bender, Zoidberg, and even Fry.

Although it's unclear if the filmmakers received permission to recreate Futurama and its characters, the clip ends with the following disclaimer/thank you note to the show’s creators:

“The makers of FAN-O-RAMA would like to express our sincere gratitude to Matt Groening, David X. Cohen, 20th Century Fox and all of the talented individuals who worked to bring Futurama into our lives. We hope that our love letter is taken as it’s meant to be: as a sign of our deep appreciation and respect for all that you’ve done, and not as some creepy we’re-outside-your=window-at-3am stalkerish sort of way. Your creation serves as an inspiration to use all and will certainly remain one of the top five cartoons about a time-traveling delivery boy named Philip for decades to come. Thank you.”

So far, there's no release date for the full-length movie, but the FAN-O-RAMA website's FAQ page simply claims it'll be released "when it's done." Alrighty then.

Tony Merevick is Cities News Editor at Thrillist and didn't watch much Futurama, but enjoyed the few episodes that he's seen. Send news tips to news@thrillist.com and follow him on Twitter @tonymerevick.