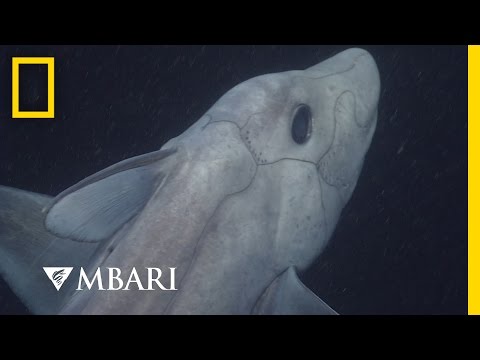 The deep ocean is a marvel, and is home to some serious treachery. It’s also brimming with mysterious creatures, like the elusive ghost shark, which for years evaded researchers who searched for a glimpse of it in the wild, often to no avail.

But video released Friday by the Monterey Bay Aquarium Research Institute in California purports to show the first ever footage of a ghost shark in its natural habitat. According to National Geographic, the creatures, known officially as chimaeras, are prehistoric, having roamed darkened waters for the last 300 million years. Chimaeras are relatives of sharks and rays, but have hollowed eyes and a nearly translucent body, making them weird -- like aliens of the ocean floor.

The footage was captured by a remotely operated vehicle (ROV) off the coast of Hawaii and California, and researchers say the encounter pretty much boiled down to happenstance. Previously, ghost sharks had only been seen in the southern hemisphere.

Dave Ebert, program director for the Pacific Shark Research Center at Moss Landing Marine Laboratories, told the magazine: “Normally, people probably wouldn’t have been looking around in this area, so it’s a little bit of dumb luck." The ghost shark caught on camera is a pointy-nosed blue chimaera -- a rare species of the animal usually spotted off the coast of Australia and New Zealand.

But seriously, check this thing out. It’s an indication of the deep ocean’s unending mysteries, which seem to become drearier and more alarming the further you descend. It's enough to make you crave a landlocked existence, but always ponder what's lingering near the ocean's floor, and what we haven't discovered yet.

Correction 12/20:A previous version of this article maintained that this was the “first ever” footage of a living ghost shark. That is incorrect. This video shows the first ever footage of a particular species of ghost shark -- a pointy-nosed blue chimaera -- and is not the only existing footage of a ghost shark.