For many parts of the country, it's a buggy time of year. A cloud of gnats or swarm of mosquitos can be a real bummer if you're spending a little time outdoors. However, it's almost a certainty that you aren't experiencing anything...

For many parts of the country, it's a buggy time of year. A cloud of gnats or swarm of mosquitos can be a real bummer if you're spending a little time outdoors. However, it's almost a certainty that you aren't experiencing anything like what's happening in Las Vegas.

Grasshoppers have invaded Vegas like the aliens in Mars Attacks. Over the weekend, there were so many of the insects that the local National Weather Service shared radar footage on Twitter, saying, "Radar analysis suggests most of these echoes are biological targets. This typically includes birds, bars, and bugs, and most likely in our case ... grasshoppers." Yes, there are so many grasshoppers swarming the city that they're showing up on radar.

The images hitting social media look like b-roll from a movie about the biblical plagues of Egypt. The insects are buzzing en masse around the bright lights of the casino-saturated strip and covering the sidewalks. Though, before you start writing proclamations about the end times on a piece of cardboard, experts say this is abnormal but not entirely unprecedented. It's happened in Vegas before and there have even been larger grasshopper gatherings. One swarm that hit Arizona in 1988 was so dense that there were insects two inches deep on the streets, per Live Science.

The deluge of grasshoppers is likely because of the unusually heavy rainfall the region has had so far this year. Las Vegas received 4.63 inches of rain. That's already over the city's annual average of 4.2 inches. Mindy Weisberger of Live Science notes that the insects tend to migrate after extremely wet winters or springs. Given the heavy precipitation, the migration makes sense. 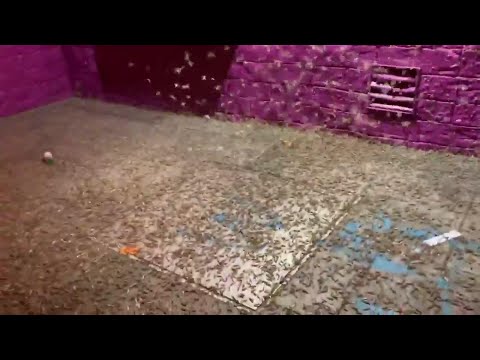 Fortunately, the grasshoppers aren't a threat to humans. "They don't carry any diseases," Jeff Knight, state entomologist for the Nevada Department of Agriculture, said last week. "They don't bite. They're not even one of the species that we consider a problem. They probably won't cause much damage in a yard."

The invasion is expected to last for a couple of weeks at most. And there's not really anything that can be done about it if you're a local. Maybe just avoid biking through a swarm with your mouth open.