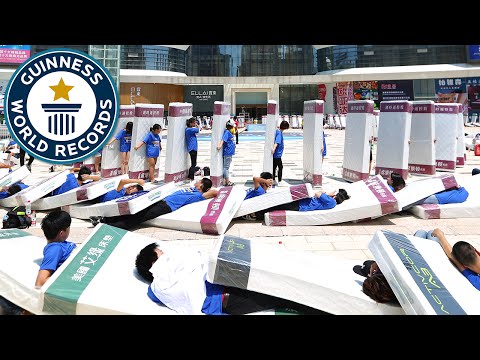 Especially around the Olympics, it's easy to remember just how exciting setting a world record can be. Michael Phelps winning his 20th gold medal (and beyond), Kate Ledecky's 800m freestyle Olympic record, the record for most human mattress dominoes toppled.

Yes, that last one is a real world record that was recently set. Yes, it makes you wonder why some world records exist at all. And yes, humanity will never be the same following Guinness World Records confirmation of the this absolutely vital display of... umm... humans leaning against mattresses and falling over successively until there are no more humans or mattresses left to topple.

The attempt was set up by bedding brands Stylution Int'l and Ayd Group because of course it was a promotion. But, despite it being totally ridiculous, there is still an odd pleasure in watching this insane video where 2,016 people fall and 2,015 of them get smashed in the face with a mattress.

Dustin Nelson is a News Writer with Thrillist. He holds a Guinness World Record, but has never met the fingernail lady. He’s written for Sports Illustrated, Men’s Journal, The Rumpus, and other digital wonderlands. Follow him @dlukenelson.
Thrillist TV
History of
The History of Tailgating