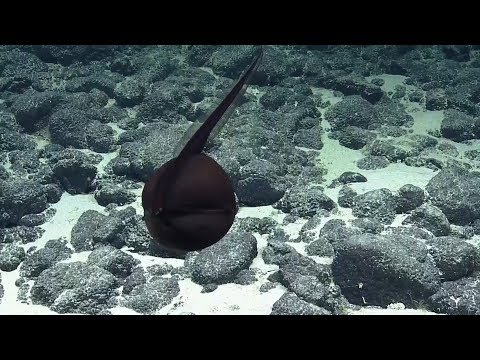 It's no secret that the ocean is a melting pot of weird and mysterious creatures, slithering, swimming, and lurking in the depths. Still, every once and a while an underwater camera captures something that truly freaks us out. Case in point: this new footage of a rarely seen eel creepily unhinging its jaw.

The dark blob was recently spotted by an underwater rover run from the Nautilus research vessel as it was exploring the Papahanaumokuakea Marine National Monument about 4,700 feet below the Pacific Ocean, just Northwest of Hawaii. The clip, which is narrated by a bunch of very excited marine biologists watching the live feed, focuses on an unmoving creature, zooming in to reveal a long spindly eel as it appears to be inflating itself. Then, things takes quite a dramatic turn as the creature stretches out its massive mouth, seeming to unhinge its jaw, completely altering the look and size of its body in a move typically reserved for some sort of shape-shifter in a sci-fi movie. The sight was such a surprise that you can hear the scientists watching all but lose their minds.

The eel in question is commonly known as a gulper eel (for obvious reasons), and is rarely ever seen by humans since they typically dwell 1,500 feet or more below the surface. And why does it have the ability to open its mouth in such a wild way? The move allows them to both eat things that are much bigger than them and also freak out potential predators by appearing much larger than they actually are.

Just one more ocean-dweller you should be thankful doesn't lounge in shallow water.

Joe McGauley is a senior writer for Thrillist. Follow him @jwmcgauley.
Thrillist TV
Wine and Cheeseburger
Our Newsletter