Say what you want about the Duke of Goateeland and eminent Mayor of Flavortown, but the man obviously knows a lot about sauces. That's not exactly being a sommelier, but when you're eating chicken fingers...

Say what you want about the Duke of Goateeland and eminent Mayor of Flavortown, but the man obviously knows a lot about sauces. That's not exactly being a sommelier, but when you're eating chicken fingers, you'd be better served asking for a man in a flame-embroidered shirt's recommendation than a man in a cravat's.

You should welcome the news then that Guy Fieri is opening a chicken chain that will host no less than 22 dipping sauces for your chicken fingers. The second location of Chicken Guy! is opening this spring on the third-floor food hall of the Aventura Mall in Miami, according to a report by Restaurant Business, and it looks like more locations are on the way. The restaurant is a collaboration with Robert Earl, the founder of Planet Hollywood, and an expansion of a restaurant that opened last year at Disney World in Orlando.

The venerable establishment will serve fried and grilled chicken as strips, sandwiches, skewers, fingers, and bowl-toppings. You'll also be able to order Chicken Guy’s Fries, which have a Fieri-branded spice blend. At the original location, everything cost just $7 or less, but it's unclear if that'll be the case here. 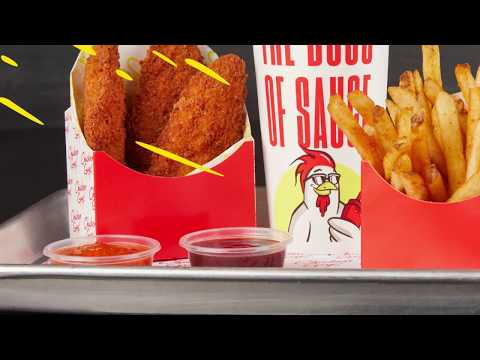 Yeah, there's even a video of Fieri rattling off every one of them. Whew.

All said, you could soon be benefiting from Fieri's discerning palate in your very own neighborhood.

“With our second location, we are on our way to open Chicken Guy locations across the country,” Earl said at the restaurant opening.

Sign up here for our daily Thrillist email and subscribe here for our YouTube channel to get your fix of the best in food/drink/fun.
James Chrisman is a News Writer at Thrillist. Send news tips to news@thrillist.com and follow him on Twitter @james_chrisman2.