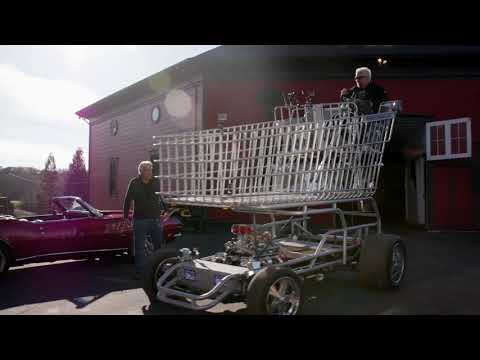 The internet is filled with many strange wonders, and a shocking amount of them involve Guy Fieri. The latest entry in this litany is a video of the Mayor of Flavortown driving former-late night host Jay Leno around in a giant motorized shopping cart. We'll tell you why this is happening, but it's far more important just to know that it happened.

So an explanation: This is a teaser for an upcoming episode of Jay Leno's show Jay Leno’s Garage. Episodes revolve around Leno discussing classic cars and motorcycles, but every now and then more eccentric modes of transportation are featured (see above).

According to stats in the clip, the automobile -- referred to as a 2012 “Shopper Chopper” -- has a 300hp small block Chevy 350 engine and can host a generous 146 paper bags. And apparently Fieri owns this monstrosity. Eater points out that this could be related to Fieri's stint as the host of the Food Network series Guy’s Grocery Games.

He explains it more practically: "All the restaurants, I gotta be able to fill it up with groceries."

If you want to check out the full episode, it'll air on CNBC on Thursday, April 26 at 10pm.