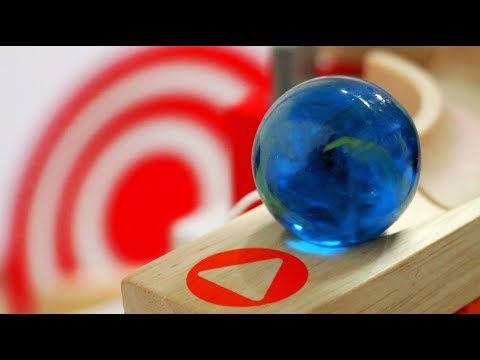 To say Youtuber Hevesh5 makes domino mazes is to commit a grave understatement. She creates domino labyrinths, kaleidoscopic networks of crumbling plastic that might as well melt your mind. She calls herself a "domino artist," but she's more like a sorcerer who studies some weird, physics-defying magic. Still, Hevesh5 isn't one to humblebrag.

For her latest domino feat, the 19-year-old Hevesh 5 -- whose real name is Lily Hevesh -- ups the ante by sending a "massive 2 story chain reaction" up some stairs and then straight back down again. It's so ornate you almost get lost in all the detailed craziness. To call this a domino maze is also massively misleading. There's so many ingredients, like a pool ball, blocks, marbles, levers, pullers, spring boards, race car tracks, strings and cups, that make this thing the beautiful monster that it is.

What's more, the video you're watching was the 32nd attempt at getting the everything right and sticking the landing. The process took four days. So if this hasn't given you a good reason to rethink the use of that old domino set collecting dust in your attic, nothing probably can.


Sam Blum is a News Staff Writer for Thrillist. He's also a martial arts and music nerd who appreciates a fine sandwich and cute dogs. Find his clips in The Guardian, Rolling Stone, The A.V. Club and Esquire. He's on Twitter @Blumnessmonster.
Thrillist TV
History of
The History of Tailgating