We are entering a brave new world with this marvel of human ingenuity. Hidden Valley has released three new "Blasted" flavors, and one of them is ranch-dipped pizza-flavored ranch dressing. It's what would happen if M.C. Escher had a dressing...

We are entering a brave new world with this marvel of human ingenuity. Hidden Valley has released three new "Blasted" flavors, and one of them is ranch-dipped pizza-flavored ranch dressing. It's what would happen if M.C. Escher had his own dressing. The ranch goes back into the ranch like an endless staircase that only leads back to itself.

Yes, the flavor of the ranch is pizza dipped in ranch. It's ranch-dipped pizza-flavored ranch. That sound? That's minds being blown. While one of the other flavors follows the Nacho Cheesier Doritos brand of remarketing with Zestier Ranch, the third is also a brain teaser. It's Bold Buffalo, which is very nearly ranch-dipped buffalo wing-flavored ranch.

Alright. Catch your breath, because the dressing raises a serious question: What the hell are you supposed to put it on? Do you just eat it on its own because it already has the pizza flavor? Do you dip it in more pizza as Escher would have wanted you to do? Since people already put ranch on everything, we'll undoubtedly find out soon enough what it's good on besides french fries. Hopefully, you can figure out what it's good on before Hidden Valley winds up offering it in a full keg.

While this is a new product, it does look like Hidden Valley did a slightly less David Lynch-ian version of this previously. The commercial below, which couldn't be more 90s if it starred Lil' Penny, advertises a straightforward Pizza Ranch salad dressing. It might be basically the same flavor, but pizza-flavored ranch dressing is a lot less alluring that ranch-dipped pizza-flavored ranch dressing. 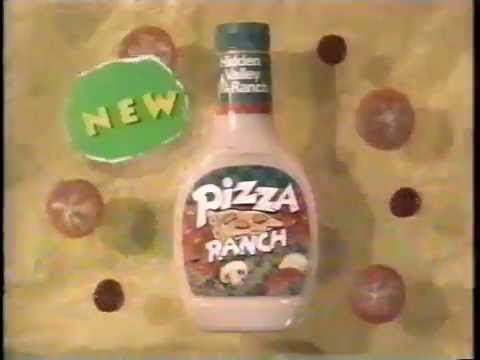 
Dustin Nelson is a Senior Writer on the news team at Thrillist. Follow him @dlukenelson.