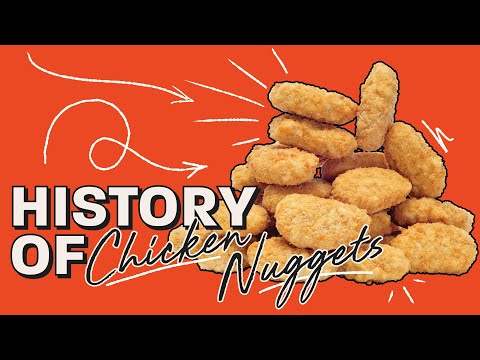 McDonald's Chicken McNuggets have grown into such an important fast food staple that you'd think they've been around forever, or at least as long as the Golden Arches have stood. But in fact, the oddly shaped pieces of crispy chicken have only been around for close to four decades. Surprising, right? Well, that's hardly the most surprising part of their history, summarized in the video above.

McNuggets first debuted at McDonald's locations nationwide in 1983, following an extremely successful test launch in Knoxville, Tennessee and a years-long effort by the company to build enough McNugget-producing infrastructure to meet the nation's insanely high demand. Why did everyone want to get their greasy hands on McNuggets? The craze likely had something to do with a government recommendation in the late '70s to eat less red meat and stock up on poultry. McDonald's, of course, capitalized on the chicken trend, and it even hired a classically trained French chef to perfect its McNugget recipe.

From there, it didn't take long for McNuggets to become the fast food icon that they are today. Within the next decade, the menu item secured its spot at the top seemingly ever child's favorite foods list. McDonald's even started selling McNugget Buddies, little blob-like McNugget shaped toys with faces and costumes. In 1998, McNuggets basked in the limelight, when McDonald's released limited edition Szechuan Sauce to coincide with the theatrical release of Disney's Mulan.

But the McNugget's rise to golden brown glory didn't come without controversy. In 2003, a judge called McNuggets a "McFrankenstein" creation after two customers sued McDonald's for causing obesity, though it's worth pointing out that the judge ultimately dismissed the suit. And in 2010, a photo of less-than-appetizing pink slime from an alleged McNugget factory went viral. Despite the image turning out to be a hoax, people still believe the nugs are made out of the goop to this day. In 2016, McD's announced it would remove artificial preservatives from its McNugget recipe, which probably helped boost its image.

Of course, there are plenty of better chicken options available across the fast food landscape today, but whether you're a fan of McNuggets or not, you have to admit that they propelled chicken nuggets into the mainstream.