The Magical History of Disney World

The happiest place on Earth started as a childhood dream. 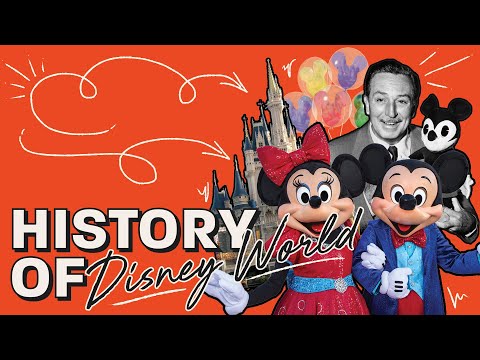 Most people dream of visiting Disney World once in their lives. That visit usually takes place when you’re a kid, unless you’re me and your mom kept promising to take you the next year and never did. Disney’s been the dream of little kids everywhere since 1965, but the concept itself started as the dream of another young man.

Walt Elias Disney was born December 5, 1901 in Chicago, Illinois -- a long way from modern-day Disney World. Disney’s a huge fan of animation and storytelling, so in the 1920s he and his brother Roy pack up and head for California. There, they start an animation company of their own. They release their first animated short, Steamboat Willie, in 1928. The film marks the first time folks are introduced to Mickey Mouse.

The Disney brothers’ animation studio continues releasing films through the 1930s and 1940s, including Snow White and the Seven Dwarfs, Cinderella, Pinocchio, and Fantasia. They’re all massive successes, as you might have guessed from the fact that you’ve (probably) seen most of them.

Amid the success of their animated ventures, Walt starts eyeing ways to expand the Disney empire. At the time, he was getting letters from kids all over the world asking to visit Walt Disney Studios. That, plus his own children’s love for the rides at Griffith Park in Los Angeles, gave him an idea: What if he created a theme park that could keep kids and adults happy?

Walt put together a plan for an 8-acre park called Mickey Mouse Land. He decided, though, that something bigger and more expensive would better suit his idea. Walt traveled the world, visiting theme park after theme park, which sounds like fun research. He realized he needed spectacle and whimsy if his theme park was going to compete.

Walt decides to buy up 160 acres of orange and walnut groves in Orange County, California. Then, on July 17, 1955, Disneyland opens for business. People love it and in just four years, Walt’s looking to expand. He finds that only 5% of visitors are coming east of the Mississippi, where most Americans live at the time. Walt is also craving more control over his business and hates all the random businesses surrounding his.

He heads east and starts buying up land in Orlando, Florida. Walt plans to use it to build a version of Disneyland that’s bigger, better, and more polished. Florida, polished? It was a different time, I guess. In 1965, Walt announces his plans for Walt Disney World: a place designed to be so much more than a theme park. It’s a destination. Beyond the theme park walls he plans to build golf courses, hotels, and shopping experiences. Basically, he wants to carve out a little perfect, happy bubble in Florida.

Unfortunately, Walt dies in 1966. He’s maybe cryogenically frozen (we all heard that rumor, right?) and his brother Roy steps up to fill his shoes. Walt Disney World’s Magic Kingdom opens in 1971 and it’s massive. The park itself could fit the Disneyland park in California in just its parking lot with room to spare. Less than three months into Disney World being open, Roy dies, too.

Lucky for both the Disney brothers, Disney World is the success they hoped it would be. It becomes a must-see destination for families all over the country. The original theme park was pretty cool, so we totally get it. It featured It’s a Small World, The Haunted Mansion, and The Country Bear Jamboree, all of which still exist today. More rides are added throughout the 1970s, like the Pirates of the Caribbean ride sans Johnny Depp’s image and Space Mountain.

In the ‘80s, Walt Disney World gets even more popular and EPCOT (Experimental Prototype Community of Tomorrow) opens. It’s not the utopian community people could live in that Walt dreamed of, but it’s cool AF and people love it. To be fair, there’s beer and you can pretend you’re visiting far-off destinations, so… yeah.

Disney keeps growing and growing, developing an intense following that includes kids and adults. Conspiracy theories crop up about Disney World, some of which turn out to be true. Like the fact that there’s an underground system of tunnels under the park to help employees quickly navigate the space. Also, all the American flags at Disney are fake so they don’t have to fly at half-mast in times of mourning. Because mourning and the happiest place on Earth just don’t mix. There’s also a secret speakeasy called Club 33 at the park, but you have to be a member to get in and waits can be upward of 14 years and fees can be more than $40,000 just to start.

Nowadays, Disney World has grown even more. In 2019, Star Wars Galaxy Edge opens and it’s spectacular. Walt would be proud.