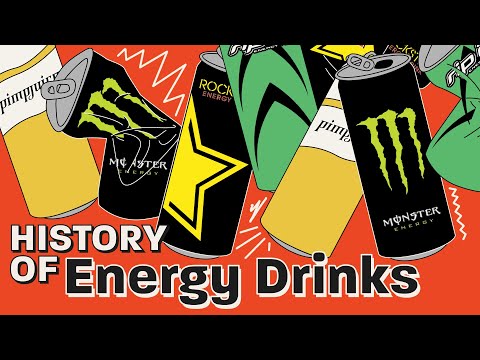 Coffee is the fuel through which all things are possible. It helps people kick start their day, get through long afternoons, and helps nightshift workers pass the time. Those who need a little more oomph—or don't like the taste of coffee—often turn to energy drinks, aka coffee's more jacked-up sibling. Today, the amount of different energy drinks on the market is staggering, and, like with many foodstuffs, the history of this uber-caffeinated drink has a long strange history.

It all started with a Thai pharmacist, an ex-monk, and a whole lot of cocaine.

Let's journey back to 1886 for a moment, when Atlanta-based chemist Dr. John Pemberton was working on a nausea and heartburn tonic, inventing Coca-Cola in the process. At the time, the drink was made with a combination of caffeine-filled kola nuts and an extract from coca leaves to boost energy. While it definitely amped people up, Coca-Cola isn't considered the first energy drink. Also, the company succumbed to government pressure and modified its recipe to be cocaine-free in 1929. Boring, but reasonable.

Twenty years later, in 1949, Chicago-based Tri-City Beverage releases a drink called Dr. Enuf, which is marketed as "The Original Energy Booster." It was full of vitamins and, of course, caffeine, but wasn't popular enough to hang with the big dogs like Coca-Cola.

In the late 1950s, Japan passed laws to curb amphetamine use throughout the country. To fill the void, the Taisho company created an herbal "energizing tonic" called Lipovitan in 1962. The tonic looked, smelled, and tasted like cough syrup and is widely considered the first modern energy drink. Sorry, Dr. Enuf.

Lipovitan is made with taurine, among other ingredients. Taurine is not made from bull sperm or pee, contrary to popular belief, but is actually a sulfur-containing amino acid with antioxidant properties. It's the key ingredient in most energy drinks today—drinks like Red Bull. Speaking of Red Bull, that famous energy drink was first invented in 1976 by a pharmacist in Thailand. It was called Krating Daeng, which translates to "Red Guar," or "Red Bull." The drink didn't immediately start flying off the shelves, but in 1984, after downing a bottle while struggling with serious jet lag, an Austrian marketing exec reached out to Red Bull's inventor in the hopes of teaming up to market it to the masses.

Together, the pair added more sugar, more caffeine, and switched from bottles to cans in an effort to appeal to Europeans. By 1985, more and more people were looking for alternatives to coffee, meaning the duo behind Red Bull was on the right track. Competitors like Jolt Cola, which promised "all the sugar and twice the caffeine," started hitting the market. Coke even began marketing itself as a morning drink, and Pepsi released a drink called Pepsi-AM, though it didn't last long. Red Bull released its new formula in Austria in 1987 and it was a hit. A decade later, Red Bull landed in America.

The energy drink became especially popular among college students that were desperate to stay awake to study, or party, or do whatever it is college kids do. They also start mixing it with vodka, which is a recipe for disaster and a serious hangover. Red Bull leans into its popularity on campuses by sponsoring parties and other things, like extreme sports events, in an effort to keep things young and hip. The brand also released a series of simplistic commercials, which we still see today.

By the beginning of the 2000s, energy drinks are everywhere. Brands start popping up left and right, and everyone has a preference. In 2001, Rockstar is introduced, followed by Monster Energy in 2002, Pimp Juice by Nelly in 2003, Rip It in 2004. The latter two drinks weren't very popular, so there's a good chance you haven't heard of them. The same year Rip It was introduced, a former monk in India decided to throw his hat in the energy drink ring after seeing the potential for a new kind of boost. He took all the things that give you energy in an energy drink but put them into a tiny, more concentrated shot form, calling it 5 Hour Energy. The shot is a huge success with truckers, who don't want to drink a lot and stop to pee often but need to stay awake.

Just when it seemed like the energy drink market was becoming oversaturated, innovation happened once more. In 2005, three Ohio State University grads came up with a genius idea: alcoholic energy drinks. Thus, Four Loko was born in the basement of a frat house somewhere in Ohio. The drink grew in popularity over time, peaking in 2010 on college campuses despite not tasting very good and being incredibly potent. If you were in college then, you remember the Four Loko craze. What you might not remember is what happened the nights you were drinking it.

By the end of the year, Four Loko is banned in a number of states and college kids everywhere are left chasing that high. Although it's probably for the good of humanity, boozy energy drinks don't really exist anymore—and anyone who was old enough to drink during Four Loko's reign knows why. Energy drinks themselves remain incredibly popular, however.

Caitlyn Hitt is Daria IRL. Don't take our word for it—find her on Twitter @nyltiaccc.
Thrillist TV
History of
The History of Tailgating