The Loco History of Four Loko 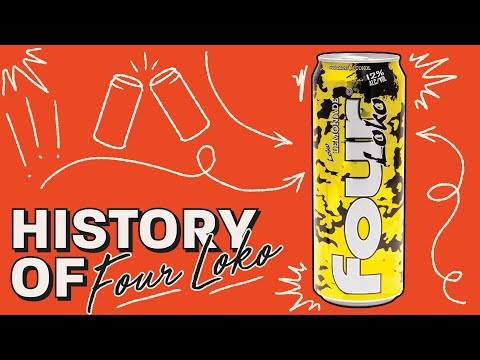 If you drink, you’ve got at least one booze you can’t stomach anymore because of one bad night. For a whole generation of young people, that booze is Four Loko. Just the smell is enough to bring back repressed (or blacked out) memories from long ago. You see, humans have been combining booze and caffeine for ages, but Four Loko is unlike any combination that came before it.

Long before there was Four Loko, Italians would spike espresso with grappa. The mixture was dubbed Caffe Corretto. In Spain, they would mix coffee with whiskey or brandy and call it Carajillo. Scottish monks made a caffeinated wine called Buckfast. Things changed in the ‘70s, when a Thai businessman mixed up an herbal tincture aimed at energy boosting called Krating Daeng, or Red Bull. It’s considered the first energy drink and it’s going to be a big deal.

Red Bull makes its way to America in 1997 and people are pumped. Coffee is out, Red Bull is in. Young people are especially into this concept. In 1999, members of the Kappa Sigma fraternity at Ohio State University start mixing energy drinks with alcohol at frat parties. This catches on in sorority houses, bars, and other places as well. Leave it to frat boys to crack such a code.

Sparks alcoholic energy drink hits the market in 2002. It’s the first mass-produced alcoholic energy drink ever and it packs a serious punch. It’s 6% ABV, which helps negates the fact that it doesn’t really taste good. At least, presumably. Jeff Wright, Jaisen Freeman, and Christopher Hunter -- three former Ohio State Kappa Sig bros -- notice how popular Sparks appears to be and think they can do one better.

In 2005, they found a company called Phusion Projects. The business is entirely dedicated to creating caffeinated alcohol, which is quite a mission statement. The trio call themselves “their own target market.” They spend some time in R&D and develop a product called “Four.” It’s a caffeinated boozey beverage with 6% ABV that’s named for its four key ingredients: caffeine, taurine, guarana, and wormwood. For those who don’t know, wormwood is that thing in absinthe, so clearly this is a recipe for some interesting nights ahead.

Or not! Four is actually a massive failure. Phusion isn’t ready to throw in the towel, though. In 2008, they take a gamble on a new drink and they go all-in. Their new creation comes in a 23.5oz can, it’s got 12% ABV, and it costs just $2.50. They call it Four Loko. Experts say one Four Loko is about four to six beers, one espresso shot, and one Red Bull, which is way more than anyone needs in one go, but man was it fun.

Although people love Four Loko, that love comes at a price. In the fall of 2008, 15 students from two different schools are hospitalized after drinking excessive amounts of Four Loko. My max was always two and even that was too much, so I can only imagine how much these kids drank. My head hurts thinking about it. By 2009, the Food & Drug Administration (FDA) has its eyes on Phusion. The federal agency tells the company that mixing caffeine and booze (an upper and a downer) has never been considered “safe” and asks that they submit evidence that Four Loko isn’t dangerous. Good luck with that!

College kids catch wind that their beloved Four Loko is in danger of being axed or changed in 2010 and they go nuts trying to savor its potential final moments. A fraternity at my college had repeated Save Four Loko parties… I remember them well. That year, Four Loko triples its revenue, making an estimated $150 million, or 60 million cans of Four Loko.

TheYale Daily News said the boozy beverage was “in a whirlwind romance with college students,” which is true and also such a Yale thing to say. Sen. Chuck Schumer, however, isn’t so taken with Four Loko. He claims the drink is “designed to appear hip with flashy colors and funky designs that could appeal to younger consumers.” Maybe that’s true, but it doesn’t take much to convince college kids to try a crazy drink with a high booze content. Just saying.

Despite the valiant efforts of young people everywhere to save Four Loko, or keep it unchanged, in October 2010, authorities of all sorts start cracking down on the stuff. Ramapo College of New Jersey bans Four Loko, claiming it’s the reason more than 20 students on that campus had to be hospitalized that semester.  That same month, a man is arrested after breaking into a home and pooping all over it. His last memory? Drinking Four Loko. Oh, and nine students at Central Washington University are hospitalized after drinking Four Loko all night.

Colleges, like the University of Maryland and Boston College, ban Four Loko, Wegmans stops selling it and states like Michigan, Washington, Utah, and Oklahoma do away with it too. It’s quite the controversy. College kids are up in arms and they’re looking for policymakers to stand with them. New Yorkers find that in New York Assemblyman Felix Ortiz, who drinks two Four Lokos to prove how safe they are. In 15 minutes he learns the hard way how wrong he is when his blood pressure skyrockets and he barfs everywhere.

Finally, on November 17, 2010, Phusion announces that it’s removing the caffeine, guarana, and taurine from the Four Loko recipe. That night, a vigil is held in Union Square in New York for the old recipe, but it’s not totally over. Almost immediately, a Four Loko underground market emerges. People start stocking up on original formula Four Loko and selling them online for $50 or more. Meanwhile, Loko Corporate is stuck with $30 million worth of unsellable inventory. To this day, we don’t know what they did with it.

The remastered Four Loko is released in December 2010. People are happy to see it back on the shelves, but not happy that it’s not the same. In January 2011, an undercover raid finds that some stores in Chesterfield, Virginia are still selling the old stuff. Sadly, that operation is shut down. Four Loko’s boring new formula continues on with minimal controversy, and far less issues, for almost 10 years.

In April 2019, a new flavor is introduced: hemp. We don’t know what that tastes like and we don’t necessarily want to find out, but it’s surely interesting. Phusion also introduces a Four Loko Seltzer in November 2019, which it claims is the hardest seltzer in the universe at 12% ABV. Probably not the seltzer you want to bust out at a backyard barbecue with family.

There’s no denying the heyday of Four Loko was quite a time to be alive. Nothing gold can stay, though. Four Loko may still exist, in new forms even, but it’ll never be quite the same.

Caitlyn Hitt is Daria IRL. Don't take our word for it -- find her on Twitter @nyltiaccc.