The Unexpected History of Ketchup

The story behind the ubiquitous tomato-based condiment. 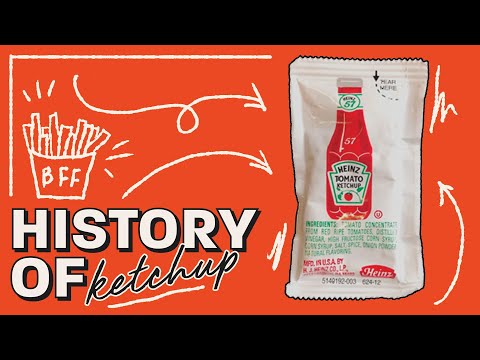 Ketchup is an American staple. It goes on fries, burgers, hot dogs -- all the classics -- and more. It’s the first condiment most people are ever introduced to, typically in some interesting applications, and one most people can at least tolerate. Ketchup has been around longer than the United States, however, and has a fascinating backstory.

British sailors encountered ketchup in 1700, though it was known as something else at the time. The sailors travel to Southeast Asia, where they’re introduced to “ke-tsiap.” They like it and decide to bring it back to Europe and colonize -- er -- change it up a little. Brits add ingredients like beer, pickles, and tomatoes to the mixture and we’re well on our way to ketchup as we know it.

After a few major historical events, Henry J. Heinz starts manufacturing Heinz Ketchup in Pittsburgh, Pennsylvania in 1876. The mixture is exactly the stuff we know today: a red, slightly tangy paste meant for dipping. It’s a hit and not long after, Hunts introduces their catsup, which is the same thing just by a weirder/fancier name.

A few more major historical events take place -- World War I and the roaring ‘20s to name a few -- and then White Castle opens in 1921. Things are going great and no one has a clue the Great Depression is right around the corner. They’ve got fast food burgers and ketchup and they’re happy as could be. At least until the 1940s, when World War II starts up.

Once that’s over, the remaining soldiers return home and try to get on with their lives. They move to the suburbs and in the 1950s, start indulging in fast food. McDonalds, Burger King, and In-N-Out Burger open. What a time to be alive! Fast food is incredibly popular and ketchup is riding on its coattails. It becomes synonymous with burgers, fries, and fast food drive-thrus. It also gives way to other condiments like BBQ sauce and secret sauce, which is a big deal.

In 1968, Heinz decides ketchup shouldn’t only be available in big bottles. The ketchup packet is invented and people can finally take their love for ketchup on the road… or just hoard the packets in the fridge like my mom did. You never know when you’ll need one.

Despite other condiments arriving on the scene, ketchup remains a staple. In 1978, Jimmy Buffet famously said that he likes his burgers with lettuce, tomato, Heinz 57, and french-fried potatoes, introducing parrot-heads everywhere to the “right” way to eat a burger and fries. A few years later, Ronald Reagan is sworn in as president. He declares ketchup a vegetable, which is debatable and very interesting.

In 1988, Hunts decides it’s time to change the name of their catsup to ketchup. Apparently, sounding fancy wasn’t drawing enough people to their product. Changing the name doesn’t work either, though. No one really notices.

Ketchup remains popular for decades to come, but Heinz still feels the need to mix things up. In 2000, the company introduces EZ-Squirt colorful ketchup. I fondly remember the purple and green versions, which both disgusted and intrigued me as a kid. In 2008, folks start getting a little more health-conscious and Heinz realizes that gimmicky colorful ketchup isn’t going to move more product for them. Organic, artisanal ketchup starts popping up on grocery store shelves everywhere.

Not much has changed in the 144 years since Heinz started producing ketchup: people still consider it a staple and you can find it just about anywhere. There are all types of ketchup available to us now.

Caitlyn Hitt is Daria IRL. Don't take our word for it -- find her on Twitter @nyltiaccc.
Our Newsletter