The Long History of Magic Mushrooms

Magic mushrooms have been making things interesting since ancient times. 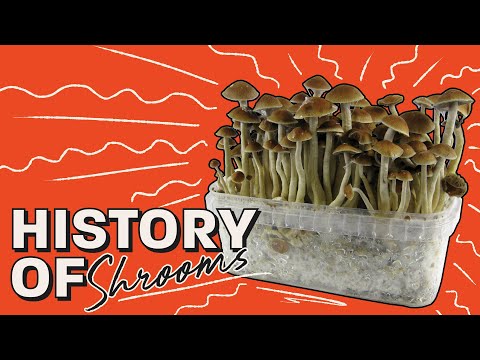 Whether you’ve done them or not, you know what magic mushrooms are and what they do. They’re naturally occurring fungi called psilocybin mushrooms that, when eaten, cause hallucinations. People have been taking them for fun for centuries and more recently, have argued that they should be legalized for their medicinal properties. That’s probably a long shot, but you might as well learn a little about magic mushrooms… just in case.

Some historians suggest North African and European cave paintings from 9,000 BC may allude to magic mushrooms. It’s also known that Aztec rituals included a hallucinogenic substance called “flesh of the gods” that might have also been ‘shrooms. It feels safe to assume that ancient cultures were using magic mushrooms for something, but we can’t be sure.

What we can be sure of, is that shrooms arrive in the United States in the 20th Century with a little help from an executive at J.P. Morgan Bank. He discovers them on vacation and thinks (presumably), “these are fun, I should bring some home to my buddies.” So he does.

Jump ahead a bit to 1957. R. Gordon Wasson, a successful banker and big fan of magic mushrooms, is traveling through Mexico where he learns more about the stuff. In Oaxaca, he finds himself in a Mazatec ceremony, conducted by a shaman, featuring ‘shrooms. Wasson claims he didn’t do any, but we’ve all used that excuse before. He does write about his experience in Life magazine, calling his article “Seeking the Magic Mushroom.” The piece is credited with naming magic mushrooms and making folks more aware of them.

Around the same time, American scientists start studying ‘shrooms. In doing so, they enlist the help of Swiss scientist Albert Hoffman, known as the “father” of LSD. He’s probably a really interesting guy. He’s also the first person to extract the psilocybin from the mushrooms Wasson brings to the states from Oaxaca. Hoffman designates the chemical as the reason ‘shrooms make people feel a little whacky.

A brief sidebar: psilocybin doesn’t work right away. It can take an hour or more to kick in, meaning if at first you don’t feel loopy, please don’t take more. What’s more, trips come in waves and can last between five and seven hours, so if you’re going to do shrooms, don’t do it on a day you’ve got plans. As far as what it feels like, those who use it can expect:

It’s not all fun and games though. It can also cause:

Now, back to the history lesson. In 1960, Timothy Leary, a counterculture and psychedelia icon, reads the Life article on magic mushrooms. He decides to make his way to Mexico and try it for himself. He does, and he alleges that he’s permanently changed. Leary says he learned more about his brain and self during his five-hour trip than he did in 15 years of school. He returns to Harvard University where he starts the Harvard Psilocybin Project to conduct experiments based around psychedelic drugs. It’s all an effort to prove his theory that drugs can lead to a higher state of consciousness.

Alan Ginsberg, a beat poet, catches wind of this and heads for Cambridge to do drugs in the name of science. He quickly becomes a big fan and tells famous friends Jack Kerouac and Charles Mingus about the fun he’s having and the fungus that’s leading the charge. They’re into it, but Harvard seems to be growing tired of Leary’s shenanigans. He’s fired in the mid-1960s but he doesn’t care. He starts distributing psychedelics throughout the US at the height of the hippie movement. Now that’s free love.

In 1970, magic mushrooms are officially made illegal in America. People don’t stop doing them, though. Writer and ethnobotanist Terence McKenna releases a book called “Psilocybin: Magic Mushroom Grower’s Guide” in 1976, which is a huge deal. He says in the book that growing ‘shrooms is “...only slightly more complicated than canning or making jelly,” which certainly appeals to someone out there because they’ve been a staple ever since.

Fast forward all the way to 2018, researchers at Johns Hopkins University confirm that magic mushrooms can be used medicinally to treat things like PTSD, depression, and anxiety. It can also help people quit smoking. The following year, amid a massive push for nationwide decriminalization of marijuana, Denver, Colorado, decriminalizes magic mushrooms. It’s not legalization, but it’s a huge step. Later that same year Oakland, California follows suit and decriminalizes all psychedelic plants and fungi. Washington and Oregon are trying to do the same.

Magic mushrooms have come a long way. They’ll probably never be fully legal, but decriminalization and medicinal use is a huge step in the right direction.