Military Experiments, Food Conspiracies, and 'The Flintstones:' The History of the McRib

The famous McDonald’s sandwich has a long, strange history. 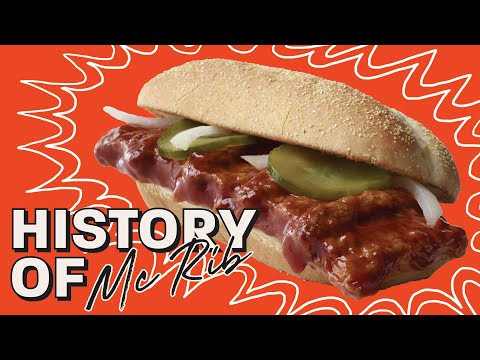 The McRib is one of the most elusive and divisive items on McDonald’s menus. It doesn’t appear often, but when it does, fans go wild.

But few know that the saucy sandwich, which first graced menus in the 1980s, has a whole lot of history hidden beneath its many layers of pickles, onions, and barbecue sauce.

It all began in the late 1960s, at a military research center in a little town called Natick, Massachusetts.

There, scientists banded together to create a weapon of mass deliciousness: Restructured meat. That may not sound very good, but if you love chicken nuggets, or, well, the McRib, you’ve been eating it for years without a second thought. Restructured meat is pretty much what it sounds like—usually discarded but perfectly edible (we really can’t stress that enough) animal parts mashed together to create a meat log of sorts.

For the military, restructured meat quickly became standard fare in MRE packets (short for Meal, Ready-to-Eat). For us civilians, it soon spread to the fast-food industry.

Around 1970, Professor Roger Mandingo of the University of Nebraska tapped into the military’s meat-scrambling technology to create a pork chop-style patty from a mix of pork shoulder and other meat, using a binding agent made from animal protein.

Not long after, McDonald’s CEO Ray Kroc turned to René Arend, a classically trained chef from Luxembourg, to create a new menu item. Arend used restructuring methods to create the Chicken McNugget, which debuted in the early '80s. People were immediately hooked, and who could blame them? Nuggets are delicious. In fact, they became so popular they triggered a nationwide shortage of chicken meat.

This inspired Kroc to ask Arend to come up with a beef alternative.

In 1981, after visiting Charleston, South Carolina, and eating a whole lot of barbecue (probably), Arend became fixated on pulled pork sandwiches. The McDonald’s recipe and development team finds Professor Mandino’s pork patty and uses it as inspo to begin working on a BBQ pork sandwich of its own. But like any good chef, Arend wasn’t going to slap his name on just anything. He insisted the sandwich really give off BBQ vibes and had the R&D team work on making it look like a rack of ribs.

It took a year to get right, but in 1982 the McRib officially debuted in the US.

This isn’t where the story ends, though. While the McRib is beloved today, diners didn’t totally get Arend's vision and the sandwich was initially considered a bust, even nicknamed the McFlop. By 1983, the McRib began slowly disappearing from menus. It reappeared suddenly in some places, only to disappear again, with no one really knowing how or why.

This seemingly random pattern continued for a while, much like it does today. There are lots of theories about why McDonald’s does this. The first being that it’s basically an attempt to trick consumers into believing there’s this major demand for the McRib by making it available for a limited time only, thus inspiring people to rush out and get it while they can. Another theory postulates that McDonald’s releases the McRib when pork prices are low to ensure that it's profitable, even if only a select portion of customers are buying it, and then pulls it from menus when prices for piggy products rise again. We may never know the truth, but one thing is for sure: What customers didn’t get in the 1980s has garnered a cult following in the years since.

In the mid-1990s, the McRib was on McDonald's menus once more as part of a The Flintstones promo. It stayed on menus for the rest of the '90s and even into the early 2000s, with fans of the McRib enjoying the sandwich's sudden stability. Then, in 2005, McDonald’s announced out of the blue that the McRib was going on a farewell tour.

The sandwich retired more than once between 2006 and 2008 and went on to see not one, but four farewell tours. Instead of getting fed up with the sandwich coming and going, fans seem to latch on tighter: A McRib locator was even created to help people keep track of it. The McRib finally returned in 2012, while many were preparing for the Mayan apocalypse. As usual, the sticky, smoky sandwich graced menus only for a short time.

It resurfaced in 2020 as part of McDonald’s regular menu offerings only to quietly fade away once more. When will you again be able to taste that sweet barbecue pork, piled high with pickles and onions? Your guess is as good as ours, but now you know how it came to be.

And if you really can't wait, you can always try this homemade McRib recipe.