The popular soda’s roots are as surprising as its fluorescent color. 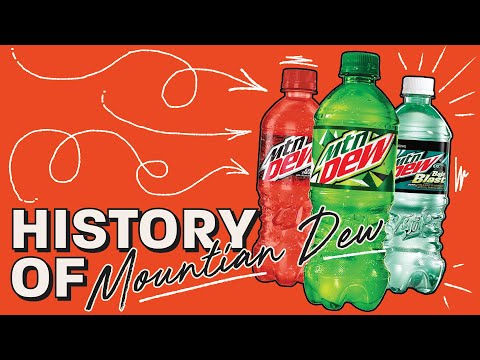 Mountain Dew is one of those drinks that catches your eye when you’re walking down a grocery store aisle. It’s up there among the soda giants like Coca-Cola, Pepsi, and Dr Pepper, but’s safe to say not everyone’s a huge fan. Maybe it’s the color. Maybe it’s the ties to gaming culture or extreme sports. Maybe it’s the sugar content. Who knows. The thing is, it’s not half bad, and it’s got a really interesting back story.

In the late 1930s, Barney and Ally Harman, two brothers from Georgia, packed up and moved to Knoxville, Tennessee. The Hartmans were apparently big whiskey drinkers, but can’t get their hands on their favorite mixer, Natural Set Up, in their new city. Rather than have someone ship it down to them or travel to get it, they decided to make their own. Pretty ambitious if you ask us.

Barney and Ally got into a lab and mixed up a carbonated lemon-lime drink. They decide to mix it with booze, as one does, and it tastes like homemade hooch. This is apparently what they were shooting for, so the mix is a keeper. When the time came to brand their new drink, Barney and Ally settled on the name Mountain Dew, which is actually old timey slang for moonshine. The more you know.

After a few years of making and drinking Mountain Dew on their own, the Hartmans decided it was time to hock it to the masses. Unfortunately, no local stores were keen on selling it as is. Maybe it was booze-related confidence, maybe they just really believed in the stuff, but Barney and Ally weren’t deterred by the rejection. They decided to rebrand their beverage as an Appalachian thirst quencher and gave it silly slogans like “ya-hooo!” and “it’ll tickle your innards.” They added cartoonish country folk and started selling Mountain Dew in green bottles, too.

In 1946, they unveiled the rebrand at the Gatlinburg Bottling Convention, which sounds pretty boring but, hey, it was the 1940s. For a few more years, Barney and Ally continued to pop up at conventions, pushing Mountain Dew to anyone who’ll listen. By the time the 1950s rolled around, they still weren’t moving much product. People were buying 7-Up and Sprite, but wanted nothing to do with the Dew. At least, not until 10 years later.

The Tip Corporation, which is a strange name for a beverage company, bought the struggling soda company in the hopes of bubbling up some business. All the Hartmans wanted out of the deal was to buy the owner dinner. So they shelled out $6.95 for a meal and the deal was done. Meanwhile, the Tip Corporation got to work on the Mountain Dew formula. They decided to add a little lemonade to the original recipe, but kept everything else Barney and Ally created.

Whatever they did to the recipe worked because in 1964, PepsiCo came knocking at their door, looking to buy the rights to Mountain Dew. With their support, the drink finally got off the ground, but the tweaks weren’t done yet. In 1974, Pepsi added orange flavoring and the signature lime-green coloring we’ve all come to know and know. They also scrapped the country bumpkin branding and surprise, surprise: Mountain Dew was soon a hit.

Fast forward to the end of the 90s, when Mountain Dew wanted to switch things up yet again. The drink was marketed as the official beverage of extreme sports, which tracked. They also decided to ditch the vowels in the name because extreme, duh. In 2001, new flavors of Mountain Dew started hitting shelves. A Cherry flavor called Code Red was especially popular with soda drinkers.

In 2004, Mtn Dew and Taco Bell joined forces to develop a special flavor to be sold at the chain’s restaurants. They called the blueish-green concoction Baja Blast and it was a big deal. Seriously, people were -- and continue to be -- obsessed with it. It’s tasty, mixes well with alcohol, and it pairs perfectly with DLTs or whatever else you fancy from T-Bell. It was a win all around, though it’s still not always available at grocery stores, which doesn’t sit right with people to this day.

This little trip into flavortown showed Mtn Dew it has more reach than it thought and it decided to go for the bros. The gamer bros, that is. How did they reel them in? It’s simple really. Gamers are up gaming until all hours of the night, meaning they need energy. They could get that energy from coffee, but making coffee over and over again is tedious, and grabbing caffeine-packed Mtn Dew from the fridge is easy. Plus that bright green color is so much more appealing than boring old brown, so Mtn Dew broke away from the sports world and locked in on gamers everywhere.

The company started doing promos that tie to game releases, got professional gamers to endorse the drink, and started slinging new flavors with gamer-inspired names like Voltage, White Out, Sweet Lightning, and Frost Bite. It also called on Doritos, another company geared toward gamers, to create a Dorito-flavored Mtn Dew called Dewitos, which sounds awful and isn’t well-received in trials. The two companies joined forces once more in 2020, this time for something a little more sensible, but also kind of questionable: Mtn Dew-flavored Doritos.

It may have taken time, but Mtn Dew is now one of the most popular sodas in the world. That just goes to show you a little persistence, and a lot of trial and error really takes you places.