The Top-Popping History of Pringles

They were far from the hit they are today when they first hit stores. 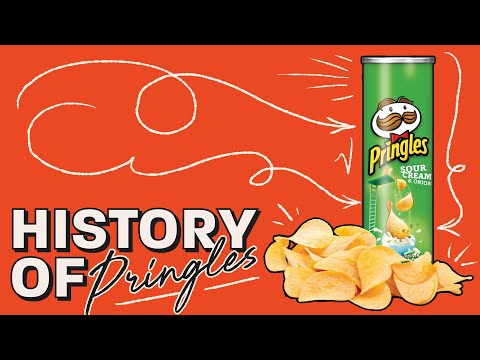 Potato chips are a dime a dozen. There are so many different brands and flavors and they’re all good for different reasons. Pringles, though? They’re in a class all their own. They’re stackable, crispy, flavorful, and never oily or overcooked. You can’t ask for much more from a chip and, well, that’s probably why they’ve been around for so long.

Potato chips are such a popular snack that it’s hard to imagine a time when there weren’t a plethora of options to choose from. In 1939, though, chips were deemed nonessential and production was halted due to the war. Anyway, after the fighting stops, potato chips return and become more popular than ever before. Chip-lovers had just one complaint at the time: they were too damn greasy and the bags were filled mostly with broken bits.

In 1956, Procter & Gamble got to work on solving the issue. They set out to create a perfect chip, enlisting the help of Fredric J. Baur. Baur’s, a chemist by trade who also happened to be really good at math. He used a geometric formula to create a saddle-shaped chip that didn’t break when properly packaged in a cylindrical vacuum-sealed can. Genius! Kind of.
The only major issue was that the chips tasted like garbage. Rather than keep trying, P&G canned its chip dreams to focus on other things for a while. A few years later, in the mid-’60s, the company was on the hunt for new products again and decided to revisit Baur’s brilliant chip concept. The idea appeared to be viable, but they had to make the chips taste good. So, P&G went to work on a new recipe that included a paste of dehydrated potatoes, rice, corn, and wheat. It used a cookie cutter to stamp out perfectly shaped chips and Baur’s saddle device to shape them... and the rest is history.

P&G dubbed the creation Pringles Newfangled Potato Chips. No one knew why they were called that, but the name stuck. There’s actually a longstanding theory that the name comes from Mark Pringle, whose work Procter & Gamble cited in a patent, but that hasn’t been confirmed. There’s another theory that they could be named for two P&G advertising employees, both of whom lived on Pringle Drive in Ohio, but who really knows. Regardless, Pringles were born, but they still weren’t exactly a hit.

The stackable chips hit store shelves, but snackers weren’t taken with them. Change is hard. We totally get it. Other chip makers didn’t like them either. In 1975, when other manufacturers caught wind of these new creations, they demanded Pringles stop calling themselves chips. They aren’t technically made with just potatoes, but they’re definitely chip-adjacent. Seems petty to us, but who can say. The Food and Drug Administration can, actually. The agency weighed in and told Pringles to stop calling themselves chips, so the brand opted for “crisps” instead. Pringles also decided to lose “newfangled” and, uh, thank goodness.

In the 1980s, Pringles finally got the notoriety they deserve, though It’s unclear why they took off when they did. Some people credited an ad campaign called “Fever for the Flavor of Pringles.” Others say it was a commercial starring Brad Pitt. There’s no definitive answer, but the chips -- sorry crisps -- were holding their own. By the mid-’80s Pringles decided to revamp their mascot (did you know his name is Julius Pringles?) for the first time, but they would go on to do it several more times down the line.

As Pringles became more and more popular, the company started looking toward new markets. In 1995, it set its sights on Europe, Latin America, and Asia, which meant new flavors as well. Pringles cooked up Prawn Cocktail, Seaweed, Serrano Ham, Roast Chicken, and even Blueberry. The following year, as popularity grew, so too did Julius’ moustache. That thing’s full of secrets.

Things were going great for Pringles until 2008, when a United Kingdom tax on potato snacks threatened sales overseas. Rather than raise prices or pull products from shelves, Pringles rebranded once more. They were no longer chips, nor potato crisps. That same year, Baur dies and his family honored his legacy by burying his cremated remains in a Pringles can. Truly a funeral fit for a hero/innovator.

As he would have wanted, people continue to enjoy Pringles. So much, in fact, that they started getting creative with how they eat them. In 2013 a Pringles hack hit the web, revealing that if you slip a piece of paper into the can you can slide all the chips out in one piece. The same year, another trick made the rounds online dubbed the Pringles ringle, a freestanding, ring-shaped structure made of nothing but Pringles.

To this day, people love Pringles. The company continues to roll out new flavors and folks find creative ways to eat them. They may not be chips, but they’re damn good.