From the Ancient Greeks to Bluetooth Vibrators: The History of Sex Toys

Sex toys have been buzzing around for centuries. 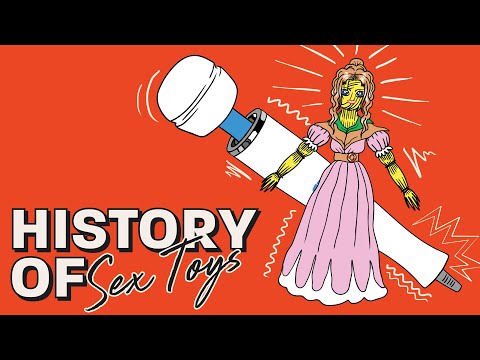 The sex toy industry is one of few industries that's both a grower and a shower. It's worth billions of dollars and is constantly expanding with new products. However, getting to this point wasn't easy, and it took a lot of time.

When you think of sex toys, you probably think of some gizmo or gadget that runs on batteries, has a USB charger, or is somehow linked to an app, but in reality, sex toys have been around for centuries.

It all started in 29,000 BC when Neanderthals in the Swabian Jura region of what is now Germany began carving rocks into phallic shapes. We don't know for sure whether they were using them as sex toys, for fertility ceremonies, or whether they just thought it was hilarious to carve penis rocks, but we do know that they paved the way for the modern-day sex toy industry.

Sex toy creation got a little more innovative—and a lot weirder—in 500 BC, when ancient Greeks started whipping up fake dongs using all kinds of materials. Some were made out of brass or stuffed leather. Some were, for some reason, made out of old loaves of bread. They called them olisbokollikes, which is almost as hard to pronounce as it is to wrap your mind around. While we don't recommend you try that, it's definitely a waste-conscious and budget-friendly way to go. Those freaky Greeks also pioneered lube by using olive oil.

In 1800s-era England, fragile men began labeling anxious or unhappy women with having hysteria. While we'd like to say this was a short-lived "medical diagnosis," it lasted well into the 1950s. Aiming to have these women relax, it was "treated" with intense genital stimulation, among other things.

Hysteria spread like wildfire, and doctors and their feeble hands couldn't keep up, so the story goes that they invented vibrating machines to make women orgasm with less effort. At the time they called them "manipulators," but we've come to know them as vibrators. The first "manipulator" was created by American doctor George Taylor, but Dr. Joseph Mortimer Granville created the first patent, disturbingly named Granville's Hammer.

While people these days typically use vibrators to get off, research suggests that their original intent was to help relieve muscle cramps. That means you're only half lying when you call it a back massager. Vibrators were marketed as a bunch of different things throughout the 20th century, including scalp massagers, weight loss tools, and pain relievers. They may have worked for some of those things, but they were definitely being used for other reasons.

By the late 1960s, men are catching on to the sex toy craze, and men's magazines start pushing inflatable sex dolls.

Around the same time, in Japan, Hitachi came out with "The Magic Wand," a battery-powered massager meant for "serious back pain." Women everywhere began using it for their...uh, back pain, and demand skyrocketed.

In 1983, to get around tightening obscenity laws, Japanese companies like Vibratex started making vibrators that were shaped like innocuous (and, in some cases, adorable) things. Some were modeled after animals, including kangaroos, turtles, and rabbits, and came in bright colors. Cute!

Another major sex toy innovation came in 1995 when the Fleshlight was designed. Originally, it was created to help collect samples from sperm donors, but the inventors quickly saw its wider potential and started selling it online.

About two years later, the first RealDoll popped up. RealDolls used silicone and mechanical joints to provide the most realistic faux experience of being with a woman to date... a far cry from the straw "dames de voyage."

Today, thanks to the anonymity of the internet and ever-evolving technological innovations, we're living in the Golden Age of Sex Toys. In fact, research shows that half of all adults use sex toys regularly.

There's no telling what the future holds, but we're guessing it's a whole lot of orgasms.

Caitlyn Hitt is Daria IRL. Don't take our word for it—find her on Twitter @nyltiaccc.
Thrillist TV
History of
The History of Tailgating