The Spicy History of Sriracha

Sriracha may be a big deal now, but it comes from humble beginnings. 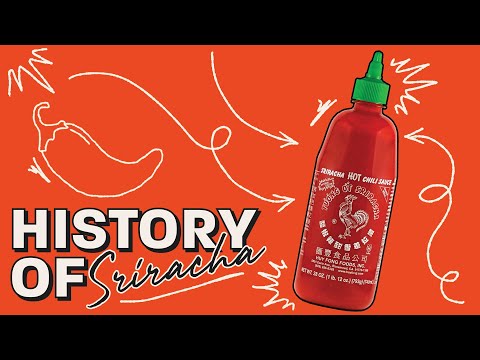 Everyone’s got that one hot sauce they put on everything. For some, it’s a more traditional hot sauce. For others, it’s sriracha. Sriracha has been growing in popularity in America since the 2010s. It got so popular there was even a major shortage at one point. But before sriracha was a big deal, it was the brilliant idea of a home-cook named Ms. Thanom Chakkapak.

It all started in the small coastal town of Si Racha in Southeast Thailand in 1949. Chakkapak began serving up a bright, garlicky chili sauce with her meals, and everyone who ate it was hooked. Her family and friends urged her to bottle and sell it and she decided it was worth a shot. She called her creation Sriraja Panich. At this point, it wasn’t quite the hot sauce we all love today, but it was well on its way.

In 1975, Vietnam-native David Tran started slinging hot sauce of his own. After about three years, he and his family fled their homeland on a Taiwanese freighter called the Huy Fong, or “gathering prosperity” in English. They landed on the shores of the United States after quite the journey on the high seas. Tran quickly noticed he and his family weren’t alone in California. In the 1980s, he saw droves of Southeast Asian immigrants.

He decided to bring a little bit of home to them by selling his hot sauce once again. His hot sauce was bottled in baby food jars (hello, budget!) and he sold it out of his blue Chevy van. The operation may not have started the way most do, but Tran saw some success. In 1983, Tran opened a facility to start selling even more inventory. He also started playing with an old recipe from a coastal region in Thailand. One that called for vinegar, sugar, salt, garlic, and specially grown red jalapenos.
Tran wanted to pay homage to the area the recipe originated, so he called it sriracha. He named his company Huy Fong, just like the ship that brought his family to America, and put a rooster on the bottle to honor the year he was born. There’s no telling who drew the original label, which the company still uses today. Tran can’t remember and neither can anyone else. It hasn’t changed since the company started though, which is pretty cool.

In the mid-’80s, Tran moved his product all along the California coast. He focused on cities with large concentrations of Southeast Asians and spent no money on marketing. He didn’t even have a sales team, but he raked in the dough. Sriracha continued to grow in popularity through the mid-’90s. People -- specifically culinary insiders -- couldn’t stop talking about it, telling anyone who would listen about their favorite hot sauce. They didn’t call it by name though. They called it “secret sauce.”

A food revolution of sorts arrived in America in the mid-2000s. The hot sauce market saw a 150% increase, growing faster than any other condiment out there. Supermarkets and restaurants started carrying it and Bon Appetit named it the ingredient of the year, which is a big deal. By the 2010s, other companies were trying to make their own versions of sriracha. You know what they say, “often imitated, never duplicated.” Tran never trademarked the name though, so the copycats were free to persist.

Americans weren’t quick to get tired of sriracha. In fact, they started putting it on everything. In 2013, the sauce was still popular, but people living near the factory had a few complaints. Residents complained about eye irritation, headaches, heartburn, sore throats, and other issues. They blamed it on chili emissions. We say they’re probably the kind of people who don’t season their food, but who knows.

Issues emerged for Huy Fong in 2017. The company split from its longtime pepper provider, Underwood Farms, over a legal dispute and some people say sriracha hasn’t been the same since. Seems a little nitpicky, but who knows. Maybe it is all in the pepper provider.

Nowadays, there are too many sriracha brands out there to even count, but Huy Fong reigns supreme. The company makes around $80 million in revenue each year, which is enough to buy a whole lot of sriracha. Many companies have tried to get in on the market, few have seen success. You can’t copy perfection, people.