The Tasty History of Takeout & Delivery

Once upon a time, eating out meant going to the food, not food coming to you. 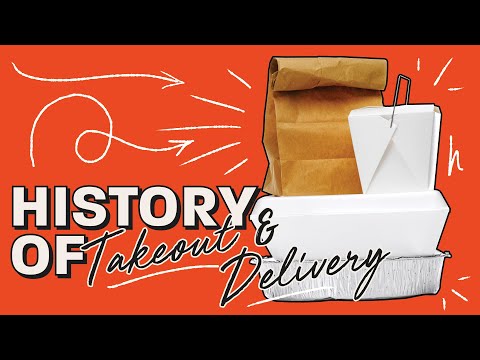 Restaurants and food to-go have been around since Ancient Rome. Like Rome, however, delivery wasn’t created in a day. The first delivery didn’t happen for more than a thousand years. Crazy, right? Sorry, Caesar. Takeout and delivery have become such a normal part of our lives that it’s almost impossible to imagine life without it.

The first food delivery takes place in Naples, Italy in 1889. King Umberto and Queen Margherita demand Faraele Esposito deliver them a pizza pie from Pizzeria di Pietro e Basta Cosi, now a legendary location. He agrees and food delivery -- and Margherita pizza -- are born. Sort of, anyway. The following year, a Bombay businessman starts a lunch delivery service through which he provides blue-collar workers all over the city lunch daily.

Delivery is slow to catch on, but things are changing. In 1922, Kin-Chu cafe opens in Los Angeles. The eatery runs an ad alleging that it’s “the only place on the West Coast making and delivering real Chinese dishes.” Kin-Chu is the first United States restaurant to offer this service and people love it. Unfortunately, it’s ahead of its time.

In 1929 the stock market crashes and in 1930, the Great Depression hits. Suddenly, no one’s interested in takeout or delivery because they can’t afford it. To make matters worse, through the 1940s the world is at war and people are too worried about that and their own survival to want food delivered. That is, until 1944, when The New York Times explains pizza to its readers for the first time.

Suddenly, people are curious. The newspaper claims pizza is super popular in Southern Italy and calls it the perfect food for takeout or delivery. The Times writes, “The pizza could be as popular a snack as the hamburger if Americans only knew more about it.” They were definitely onto something there.

The war ends in 1945 and American soldiers return home. Millions of Americans start settling into a new, more comfortable life. They ditch the city for the suburbs and plant themselves on the couch in front of the TV as much as possible. They also decide there’s no need to go out to restaurants when they could be eating in front of the tube. This leads to some serious struggles for restaurants across the country, which pushes them to turn to takeout and delivery. These services go from novelty to norm in no time.

By the 1950s, pizza catches on. Better late than never, right? Most pizza spots offer takeout and delivery, which further popularizes these services. Los Angeles’ iconic Casa D’Amore pops up in Los Angeles, offering free delivery on any order over $2.50. It’s widely considered the first pizza place to do this. Looks like LA was ahead of the delivery curve.

Fast forward to the 1990s, Pizza Hut launches Pizzanet. It doesn’t allow anyone anywhere to order delivery pizza, but it does work for people in Santa Cruz, which is pretty revolutionary for the time. Pizzanet is actually one of the first websites on the internet, meaning pizza is probably the first good bought and sold online. The more you know, people!

A year later, in 1995, WorldWideWaiter launches at Waiter.com. It’s widely considered the first online restaurant delivery service. It operates strictly out of the Bay Area, but features more than 60 different restaurants. It’s basically an early Seamless or GrubHub. Speaking of Seamless, in 1999, a group of New York businessmen launch SeamlessWeb.

Presumably, they were tired of the West Coast being able to order food from whatever restaurants to their homes but not them. SeamlessWeb allows corporate clients to buy massive amounts of food from restaurants. In 2004, GrubHub is founded in Chicago. The following year, Seamless starts allowing individuals to use the service. They also cut “Web” from the name.

In 2011, Seamless and GrubHub stop competing with each other and merge. The competition isn’t over though. In 2013, DoorDash launches and in 2014, Uber Eats launches. Nowadays, those three companies account for 80% of all online food deliveries. Nearly every major city in the world has some type of online delivery platform available and Americans love it. Currently, they’re spending about $16 billion per month on takeout and delivery.

Sometimes you just want to enjoy a restaurant-quality meal in the comfort of your home. Queen Margharita understood that and we’re eternally grateful to her for helping bring about takeout and delivery. Next time you’re eating your favorite restaurant dish in your undies, pour a little out for the queen.