The Sparkling History of White Claw

White Claw hasn’t been on the market long, but its impact can’t be overstated. 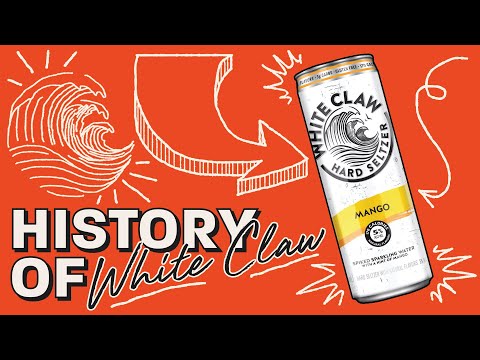 Before 2019, seltzer didn’t get much respect on the drink circuit. There’s just nothing that special about it. At least, there wasn’t until White Claw started infusing the stuff with booze. Since then, it’s been “no laws when you’re drinking claws,” which may not be true, but is nonetheless fun to say. White Claw added a little fun to summer 2019 and continues to help spice up self-isolation for a lot of people these days. And while it’s had a huge impact on our society, it hasn’t even been around that long.

Technically, White Claw’s origins date back to the 18th Century, when chemist Joseph Priestly first infused water with CO2. His invention saw him dubbed “the father of the soft drink,” but a title is all his invention ever got him. Priestly never enjoyed financial gain or notoriety (not much anyway) from his creation. Apparently, the bubbly water was popular though because in 1799, Thwaites’ Soda Water opened in Dublin, where the product was manufactured for the masses.

By 1865, suppliers started advertising different flavors of the carbonated beverage. Because who wants to drink bland soda water? The first flavors were pineapple, orange, lemon, apple, pear, plum, peach, apricot, grape, cherry, black cherry, strawberry, raspberry, gooseberry, and melon... which is quite a range. Maybe even more than White Claw offers right now.
Anyway, in the 1950s people decided that soda water wasn’t all that good, but sparkling water and seltzer were. Seltzer was especially popular at the time. So much so that New Yorkers started hiring delivery guys just to drop seltzer at their door. Sounds like Uber Eats before it was Uber Eats, but that’s a The History Of episode for another time.

A decade later, vodka soda became more popular than ever. JFK is president and the people loved him. So much that a vodka soda spinoff was named after his mother, Rose Kennedy. The drink contains vodka, seltzer, and a splash of cranberry juice. People still drink it today, though they typically just call it by its ingredients. In the 1970s, there was a shift in what people want to drink. Anthony von Mandl, an entrepreneur fresh out of college, started selling imported wines from his car in Canada.

He was surprisingly successful in this venture and was able to buy a vineyard, later known as Mission Hill Winery. Von Mandl earned the nickname Tony Baloney because he was a bit of a bullshit artist and a master salesman. Meanwhile his competition started to sling sugary wine coolers to thirsty masses. Creators like Mandl realized they can do something similar, but with a twist by using malt, and flavored malt beverages are born.

Coors unveiled its version, Zima, to little fanfare. People didn’t like it and for whatever reason, David Letterman spent a lot of time making fun of it on The Late Show. For von Mandl, this was a learning opportunity. He saw the innovations and failures and combined them with some statistics.

The booze purveyor learned that about 25% of men don’t actually like beer, but don’t want to be seen drinking something else. Toxic masculinity -- it transcends time and trends. To appeal to male beer-haters, von Mandl created a malt beverage in a beer-shaped bottle and named it Mike’s Hard Lemonade. In 1999, he started a new company called Mark Anthony Group and unleashed Mike’s Hard Lemonade on the United States and, unknowingly, on high school party goers everywhere. Thanks, von Mandl.

Anyway, where were we? Right, the road to White Claw. So in 2013, Bon & Viv launched SpikedSeltzer. They alleged that they’re the first hard seltzer brand, but that has been somewhat contested. In the years to come, the spiked seltzer market was absolutely flooded. Not only were the resulting drinks tasty, they were low in calories which gets fitness enthusiasts buzzing. And it’s not only boozy seltzers that started flying off the shelves. Drinks like LaCroix saw a 42% increase in sales, despite no one knowing for sure how to say the brand’s name.

While the seltzer boom unfolded, von Mandl decided to throw his hat in the ring. Mike’s Hard Lemonade may not have gotten the respect he thought it deserved, but White Claw? That may be his greatest innovation. He released the product in 2016 in Natural Lime, Black Cherry, Ruby Grapefruit, Raspberry, and Mango flavors. At the same time, Truly Hard Seltzer hit store shelves, but patience, persistence, and a social media shtick ultimately helped White Claw prevail.

In 2018, the hashtag #ClawLife took social media by storm. People were curious about Claws and boom: the following summer was a lawless smorgasbord of ever-so-slightly flavored booze-filled seltzers. Truly and other brands continued to try to compete, and did see success, but none will ever reach the level of notoriety of White Claw.

Bros, basic bitches, wine moms, party dads, and college kids alike have all agreed: White Claw is the one. Everyone spent the summer of 2019 drinking it like it was going out of style, unknowingly threatening their supply. By September of that year, there was a shortage, which was a huge bummer, but didn’t last too long. Fast forward to March 2020, when the pandemic ended the party. But White Claw returned with even more flavors, including lemon, tangerine, and watermelon.

Who knew booze would be what put seltzer on the map? Well, von Mandl I guess, but certainly not us. Tonight, as you crack open your first Claw, be sure to say cheers to him and his innovation.