In the world of hot peppers, you have to fight fire with fire. It was only May when the Carolina reaper was unofficially passed up as the world's hottest pepper by dragon's breath. The UK-based dragon's breath was developed for medicinal purposes and clocked in at a 2.48 million rating on the Scoville scale. (That's the scale that tells you how hot things are. Tabasco ranks between 2,500 and 5,000 Scoville units.)

Now, the man who developed the Carolina reaper has a new pepper he's calling Pepper X (at least for now), and he claims this level-10 villain lands at 3.18 million Scoville units. Damn. 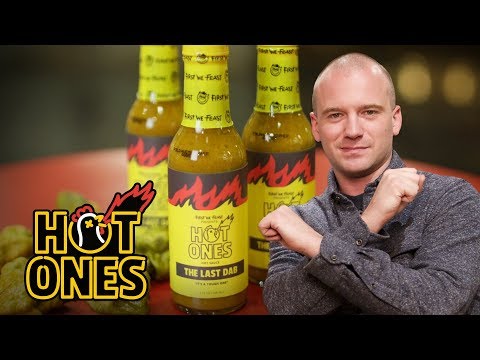 Smokin' Ed Currie and his PuckerButt Pepper Company have been developing pepper X for 10 years. It's now ready to destroy mouths and digestive tracts across the world. Though, it's only unofficially the world's hottest pepper. He's submitted the tiny devil to Guinness for verification, which he expects to come through in November. Nonetheless, it's hot as hell.

Unlike dragon's breath, which isn't available commercially, you can already get a little taste of this instant intestinal horror show. It's the pepper behind the new hot sauce from "The Hot Ones," The Last Dab. The sauce is a collaboration between First We Feast's "The Hot Ones" show, New York's The Heatonist, and Smokin' Ed.

Though the sauce is still undergoing some tests to get an accurate Scoville rating, it has been registering around 2.4 million on the Scoville scale. That's hotter than a raw Carolina reaper, which averages around 1.9 million.

Interestingly, the peppers are hot enough to make an intense sauce without an extract. It's actually made from a mash of pepper X, giving it, by most accounts, actual flavor instead of the flavorless onslaught of heat many sauces provide.

The first run of The Last Dab -- so named because of how the final and hottest sauce is used on "The Hot Ones" -- sold out quickly, but more is on the way. Gird yourself, it's probably going to be a gruesome experience.