Spend a Lot of Time on Your Phone? Here's How It's Changing You 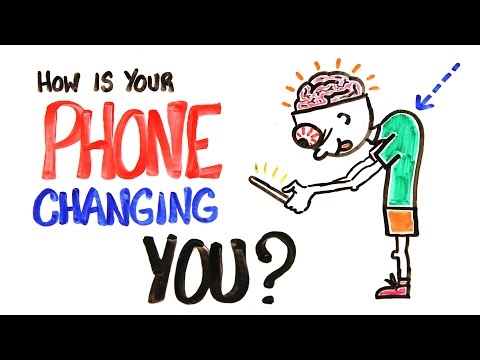 Cellphone use is ubiquitous. Of the seven billion people on Earth, six billion own a cellphone and constant interaction with them is changing us. At least that's the (basically undeniable) contention made in a new AsapSCIENCE video that uses a number of recent studies to highlight the impact of smart phones.

From posture to myopia, phones are capable of causing a lot of damage. That doesn't discount the good that has been brought about by the ability to have tiny little computers in our pockets, but it's not all good and it's worth knowing about since research says people look at their phones for an average of 4.7 hours a day.

Part of that crazy amount of time is that is that phones have become a way to avoid boredom. 93 percent of people 18 to 29 say they have used smart phones as a way to ward off a bad case of the bores (don't forget, boredom can be good).

That boredom response drives many to play games like Candy Crush or Angry Birds, once upon a time before it was made into a movie no one asked for. The stacking of small goals and the revelation of new levels causes the brain to release dopamine, creating what is called a compulsion loop. Most people know exactly what that is, having been unable to stop playing one game or another because there's a simple time-wasting pleasure in it all.

That's just the tip of the iceberg. Watch AsapSCIENCE dig into it above. It's nothing that is going to be the end of us all, just set the phone down sometimes. Instead, gather some loved ones around the radio and let the kids play a game of jacks in the fading candlelight (what do people do when they aren't looking at phones?!).

Dustin Nelson is a News Writer with Thrillist. He frequently lets his phone die, then raises it from the dead like Melisandre. Follow him @dlukenelson.
Thrillist TV
History of
Our Newsletter