How Did 'Dick' Become Short for 'Richard'? 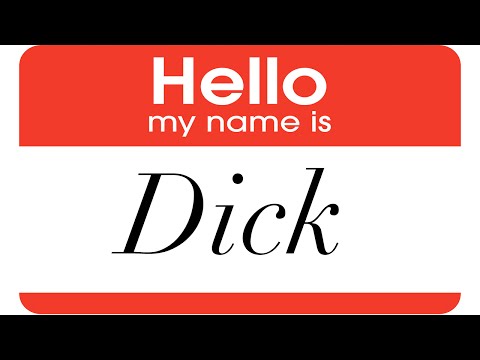 Dick, dick, dick. Few, if any, other words in the English language have the privilege of common usage as a name, a synonym for penis, and a great way of describing a jerk. So, how the hell did that happen? And more specifically, how did "Dick" become short for the name Richard? A recent video from the folks at Today I Found Out helps explain how dick rose to such prominence.

Turns out, calling someone Dick instead of Richard is a somewhat recent evolution of the nicknames Rich and Rick, both of which we also use instead of Richard to this day. As the video's host explains, it's sort of like one of those "knee bone connected to the thy bone" progressions. In the days of writing everything by hand, Rich and Rick emerged as common nicknames for Richard, and apparently, people also used to like to come up with nicknames that rhyme. This gave rise to nicknames like Dick and Hick around the early Thirteenth Century, but unlike Hick, Dick continues to stick around today.

Of course, Dick isn't the only nickname to emerge from a similar rhyme-based progression. For example, have you ever wondered by people named Robert are often called Bob? Here are a few examples, per the video:

Mind blown yet? Be sure to watch the video for the full Dick story.

Tony Merevick is Cities News Editor at Thrillist and his middle name is Robert, but he would not be pleased if you ever call him Bob. Send news tips to news@thrillist.com and follow him on Twitter @tonymerevick.
Thrillist TV
History of
The History of the McRib