It was earlier in March that NASA unveiled the highest resolution photo of Mars' surface ever made. It's the kind of picture that can create the rare sense of wonder that makes you feel small in a vast, unknowable universe. But the relatively brief moment of inspiration you might feel looking at the landscape took a lot of forethought and a lot of work, even setting aside the years of planning that went into getting a rover on the planet's surface in the first place.

So, you may be surprised to learn that the stunning panorama -- constructed from more than 1,000 individual images -- was largely possible because the team behind the Curiosity Rover was on vacation at the time, leaving the rover standing still. The images of "Glen Torridon" on the Martian surface were taken from November 24 to December 1 of 2019, while "the mission team was out for the Thanksgiving holiday," NASA explains. Because of the holiday, it was able to photograph the same area for days. The Mastcam was programmed to take photos from noon to 2pm (local time on Mars... so, do we call that MST?) each day to ensure consistent lighting. "This is the first time during the mission we've dedicated our operations to a stereo 360-degree panorama," Ashwin Vasavada at NASA's Jet Propulsion Laboratory (JPL) said in a statement.

However, the process from Curiosity to your eyes isn't as simple as the rover sending back an image and having it uploaded to a website. There's much more to it.

JPL imaging specialist Hallie Abarca traced those pixels from your eyes back to the surface of the red planet. "Each [image] gets cut up into pieces and transferred to orbiters [around the planet]," she tells Thrillist when reached by phone. The images then "come back in chunks," arriving at one of three Deep Space Network sites on Earth in need of reassembly. It's the job of specialists like Abarca to reassemble each image and then combine the many images into a single coherent panorama.

"There's metadata in each image, something like what you might see from your Canon camera at home," she says. You'd see that metadata when you move an image from the camera to your computer. It may tell you the date and time and possibly even the location where that photo was taken. The metadata from Curiosity helps tell a program developed at the JPL where each image goes within the panorama. Then the team updates the metadata to correct the position of the images to remove seams between them. "[The process] can take days or even weeks, especially with large panoramas like this one," Abarca says of the image that was processed by Malin Space Science Systems.

All of that work and the 1.8 billion pixels in the image allow scientists and space enthusiasts to zoom in on the landscape in impressive detail. 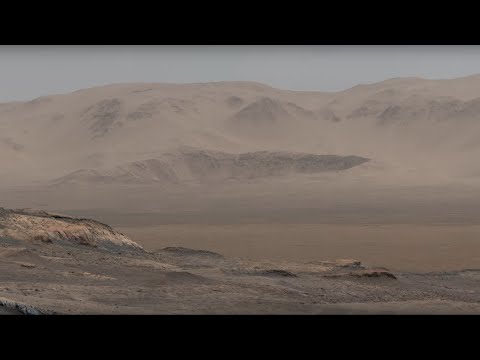 If this image excites you, wait until the July 2020 launch of the recently named Mars Perseverance Rover (previously referred to as the Mars 2020 rover). Abarca says the imaging capability far exceeds what we've seen with Curiosity and Insight. We're going to see Mars as we've never seen it before, again.