Garlic fiends across the Internet were entranced this week after a video of a supposed clove-peeling hack went viral on Twitter... 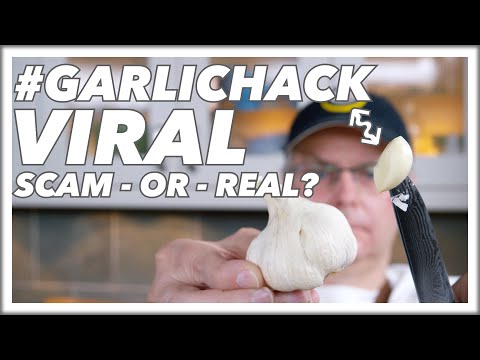 Garlic fiends across the internet were entranced this week after a video of a supposed clove-peeling hack went viral on Twitter. The video, which makes the ever-frustrating process look incredibly simple, was put to the test by lots of folks eager to eliminate one of the most tedious parts of meal prep. However, many found that the trick didn't actually work, and others ended up with some serious knife wounds while testing it out. Luckily, though, one intrepid chef figured out the secret, and just released a video plainly explaining how to pull it off.

The video, published on the popular YouTube channel Glen & Friends Cooking, demonstrates the step-by-step method to easily pluck and peel garlic cloves from the bulb in one swift motion. Chef Glen explains that he spent the better part of a day trying to get the hack to work after seeing it online, only to have someone else walk into the kitchen and figure it out immediately.

You'll want to watch the full video (shown above) yourself to fully understand how to do it, since it's all a bit more involved than the viral clip would make it seem. The trick is to use an especially sharp paring knife and to first slice around the root to loosen the cloves. From there, the video suggests you stab each clove toward the bottom -- about three-quarters of the way through -- and then twist to remove it, skin-free.

While Glen pulls back the curtain on how to actually pull off the viral hack, he also makes clear that if you're not comfortable using a sharp knife (or "clumsy," as he puts it), you should steer clear of trying this hack altogether. Also, he says that even though it's a handy trick, it doesn't necessarily always remove all of the skin cleanly.

And sure, this is good news for anyone trying to save some time and frustration in the kitchen, but also yet another reminder that not everything you stumble across on the internet is quite what it seems.

Joe McGauley is a senior writer for Thrillist. Follow him @jwmcgauley.
Thrillist TV
History of
Our Newsletter