A Total Solar Eclipse Is Happening Monday. Here's How to Watch It Online.

You probably can't be there, but you don't have to miss out entirely.

The only total solar eclipse of the year will make an appearance just before time runs out on 2020. For viewers in the United States, this isn't going to be the "great American eclipse," as it's not going to be visible in the US.

The total solar eclipse will arrive early in the day on December 14. For the second time in 18 months, eclipse chasers in parts of Chile and Argentina will get lucky and see the eclipse if the weather cooperates. From the center of the line of totality, viewers will get about two minutes and ten seconds of darkness, according to NASA.

A solar eclipse takes place when the moon passes between Earth and the sun, creating a short period of night-like darkness as it blocks the sun's light from reaching the Earth's surface. The center path of the eclipse is the line of totality. That's the area where viewers will experience complete darkness. There are also areas outside of totality where viewers will be able to spot a partial solar eclipse, which looks a bit like Cookie Monster took a weirdly even bite out of the sun.

This NASA map is a handy tool in figuring out what you'll see from different areas.

Of course, the coronavirus pandemic has made it difficult for eclipse chasers to make their way to destinations along the line of totality. It also means that some live videos that might have otherwise been made available by people traveling to the eclipse will not be an option for anyone who wants to experience the eclipse virtually. 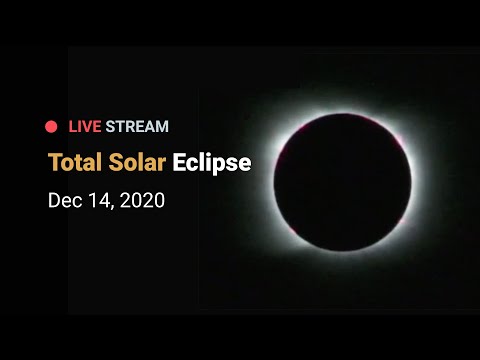 However, you aren't totally out of options. You can tune into a Time and Date live stream from the Villarrica volcano in southern Chile, which starts at 3:30 am ET. (You can watch the Time and Date stream in the player above.) You can also catch the eclipse on NASA TV at 9:40 am.

If you're fortunate enough to be there in person, be sure to observe the best practices for watching the eclipse, and wear eye protection. Never stare at the sun.

If watching the eclipse on a laptop isn't cutting it for you, you don't have to wait all too long before you're able to catch one in the US again. There's another total solar eclipse cutting through the country in 2024.