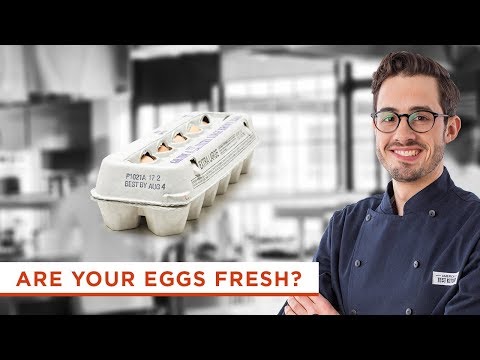 Figuring out exactly how fresh the eggs in your fridge are can be a bit tricky. Same goes for the ones in the grocery store aisle. Sure, you can peek at the "best by" or "sell by" date on a carton to get a sense, but without owning your own chickens it's pretty much impossible to know exactly how fresh they are.

It turns out there's actually a really quick and easy way to figure out precisely when the eggs in a given carton were packed, so you can ensure you take home the newest ones.

In a YouTube video posted by the folks at America's Test Kitchen, editor-in-chief of Cook's Illustrated magazine, Dan Souza, explains the shockingly simple yet seemingly little-known way to figure out when your eggs were packed. As he details, you just need to find the three digit number right near the "best by" date. That number is known as the Julian date, and signifies the number of the day in the calendar year on which the carton was packed. So, for example, 001 would mean the eggs were packed on January 1, 004 signifies they were packed on January 4, so on and so forth through 365, which means they were packed on December 31. Souza recommends using this handy trick to locate eggs that are less than three weeks old in order to make the tastiest egg-involved recipes.

The video also helps explain why the "float test" isn't the best way to figure out how fresh they are. Many people rightly believe that fresher eggs will sink in a bowl of water and older ones will float (because the air pocket inside expands over time), but as Souza explains, it takes a whopping four to six months for an egg to float, which is way, way beyond optimal freshness.

That's it: a little bit of simple math is all takes to ensure you scrambles, omelets, and quiches are as tasty as they can be.