Getting some one-on-one time with Ina Garten would be a dream come true for just about any foodie with a pulse, though few of us will ever the chance. 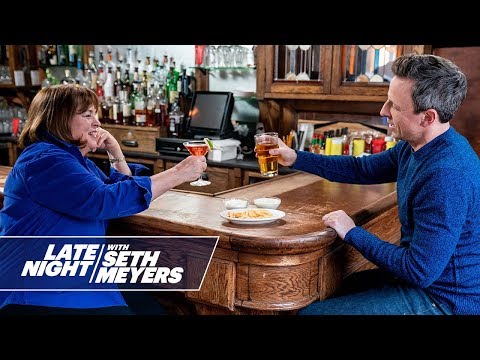 Getting some one-on-one time with Ina Garten would be a dream come true for just about any foodie with a pulse, though few of us will ever the chance. It's really too bad, because she seems like a hilariously fun hang, especially after a few adult beverages, as Seth Meyers discovered first-hand when he took her out to go day drinking during a recent episode of Late Night.

In the wildly delightful segment, Seth meets up with Ina at New York's Corner Bistro, where they kick off their big day out by downing a Pimm's Cup before channeling their inner bartenders and mixing up (and drinking) a few cocktails from one of Ina's cookbooks. Thanks in no small part to Seth's heavy pour, things start to go off the rails, and the giggles come out.

Ina then challenges Seth to a drinking game in the form of a dipping sauce blind taste test challenge, and makes him guess between sauces made from her recipes and Arby's Horsey Sauce, McDonald's BBQ Sauce, and KFC gravy, respectively (Ina also offers up some perfectly deadpan reviews of the fast food versions). They also play a weird celebrity foot-matching game, and some famous chef "who said it" trivia, before the whole bit crescendos with an incredibly entertaining and sloppy cake reveal. You really owe it to yourself to watch the whole thing, though, if only to reinforce the the fact that Ina Garten is indeed the best.