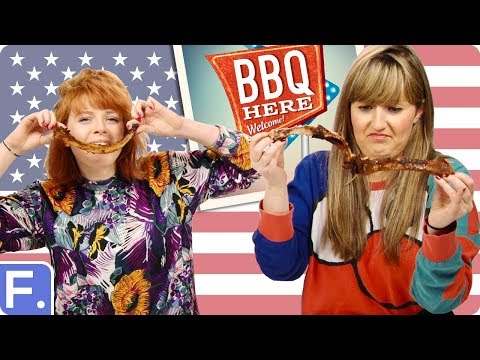 Irish cuisine has a long-standing, important role in the United States. There's whisky, for example. And corned beef on St. Paddy's Day. And potatoes. And sometimes, a decided lack of potatoes that leads to a lot more Irish people deciding to live in the US.

But the relationship of American food and Irish people isn't quite so solid. In fact, plenty of Irish people have never experienced American food. Which is why it's funny to watch them try America's greatest export: barbecue.

Uploaded to the YouTube channel Facts. (Aptly named? Maybe!), the video features three pairs of Irish folks on a mission to eat the best of American BBQ, including: ribs with BBQ sauce; brisket with mustard BBQ sauce; burnt end beans; pulled pork with chipotle sauce; and biscuits and gravy. Throughout the course of the multi-pronged test, the tasters almost universally love the slow-and-low cooked meats, uttering comments such as, "I don't even like ribs, but these are delicious."

The side dishes don't fare quite as well. But watch for yourself to see how your favorite foods stack up back in the old country.