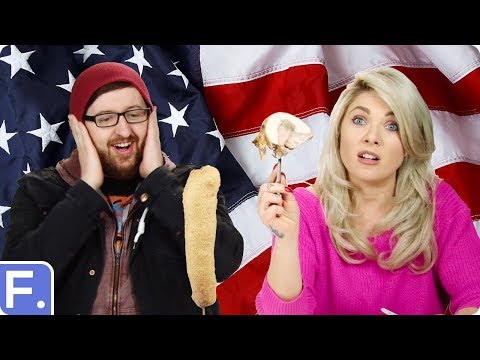 Although many Americans are familiar with at least a few basic Irish foods like corned beef and cabbage (a favorite around this time of year), it seems like many Irish people aren't as well-versed when it comes to your every day American foods, like barbecue. Even fewer have probably dared to eat insane American food monstrosities like cronuts and cheeseburgers made with freaking donuts, which is why it's particularly hilarious when they're asked to taste them on video.

Luckily, a YouTube channel called Facts. did exactly that, and asked three pairs of Irish people to sample "weird American food inventions" like pizza burgers, Turducken, and the aforementioned donut cheeseburgers and cronuts. While the participants generally appear to like a few of the bizarre American food choices, it doesn't take long before they hilariously start freaking out, with reactions like "I think my mouth is having a nervous breakdown" and "It's like a Christmas dinner wrapped into a ball" and "This is taxidermy gone wrong." At one point, you almost even feel bad for them, seeing as Turducken isn't exactly a staple.

Unsurprisingly, everyone enjoyed the cronuts.

Tony Merevick is Cities News Editor at Thrillist and would totally eat all of this stuff. Send news tips to news@thrillist.com and follow him on Twitter @tonymerevick.