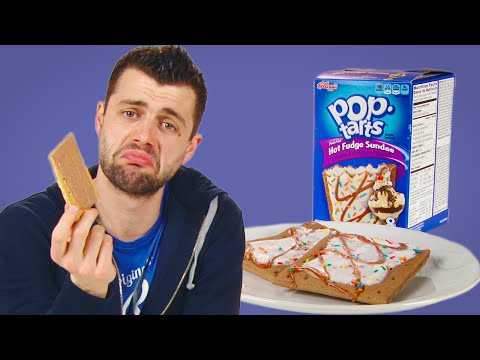 Sure, you probably haven't eaten many Pop-Tarts since your days of running for the school bus, but chances are you've eaten at least one of the sugary breakfast rectangles at some point in your life. Actually, it's hard to imagine the American breakfast world without Pop-Tarts, which is why a new video showing Irish people tasting them for the first time is both fascinating and hilarious.

As seen in this latest taste-test video from the Facts. YouTube channel, three pairs of a Irish people are asked to sample five "American" Pop-Tarts flavors: Red Velvet, Hot Fudge Sundae, S'mores, Maple Bacon, and Watermelon. While it's important to note that some of these flavors are relatively new and not your typical Frosted Strawberry Pop-Tarts, the participants' reactions unsurprisingly range from surprise and delight to shock and horror. For example, merely seeing and smelling the bacon flavor elicited immediate responses like "It looks disgusting." And as one of the men eloquently put it after eating a few bites: "I don't think any pig would be proud to end up in one of those." However, most of the brave Irish people enjoyed flavors like Red Velvet and Watermelon, the latter of which surprise us in our own taste-test.

The Pop-Tarts video follows many similar taste-tests in which Irish people are subjected to weird or notable foods from around the world, such as American barbecue, "weird" American foods, and a variety of international delicacies, among others. At this point, who knows what the hell they'll come up with next -- although, you can probably expect another helping of great reactions.

Tony Merevick is Cities News Editor at Thrillist and could actually go for a watermelon Pop-Tart right about now. Weird. Send news tips to news@thrillist.com and follow him on Twitter @tonymerevick.