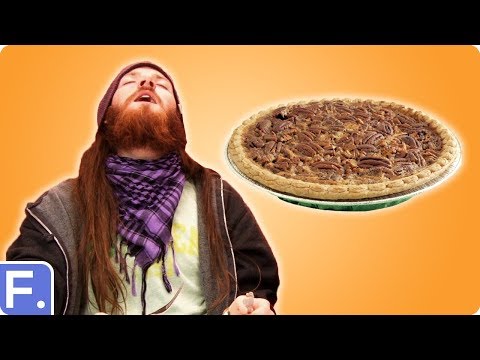 It's Thanksgiving week and it's a time to be thankful. Start by being thankful most people in the U.S. get a couple days off to engorge their thorax with turkey, cranberry sauce, and mashed potatoes. People in other countries aren't so lucky. Though they're definitely free to call in sick, then eat pumpkin pie until they're actually sick.

While the standard Thanksgiving menu in the States isn't all that different than Christmas cuisine in the U.K., the lovable weirdos at the Facts. YouTube channel are taste testing American Thanksgiving food to assure us this is a week of the absolute best food.

The taste testers largely agree, even if they're sure that butternut squash soup is "vegetarian food because normal people don't eat it." And they obviously agree on scalloped potatoes. One of the taste testers puts a fine point on it: "Oh yeah, the Irish love potatoes, don't we?"

Yes, while these same taste testers have previously been skittish about cronuts, southern food, and American presidential debates, everyone can agree the Thanksgiving cornucopia is delicious. "I feel like I've been cheated my whole life because I haven't had this before," says one of the Irish. You have been cheated. However, you're welcome to join the annual American race to eat as much as possible and fall asleep on the couch in front of football, even if you're watching a different kind of football.

Dustin Nelson is a News Writer with Thrillist. He holds a Guinness World Record, but has never met the fingernail lady. He’s written for Sports Illustrated, Rolling Stone, Men’s Journal, The Rumpus, and other digital wonderlands. Follow him @dlukenelson.
Thrillist TV
Wine and Cheeseburger
Wine and Cheeseburger: Harley and Lara Pair Falafel with Wine