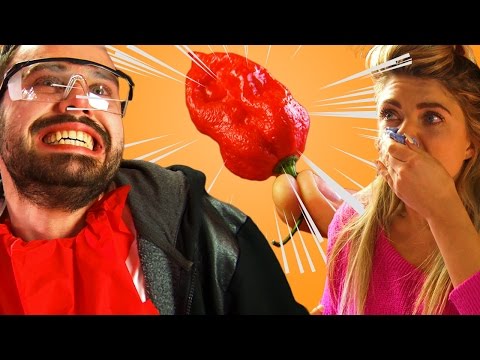 Spicy food holds a weird allure for YouTubers. People are willing to destroy their mouths (and day and the next morning) to see if they can handle the spiciest foods in the world. From food show hosts to high schoolers, many have done it and everyone regrets it in the end.

The Facts. YouTube channel is joining the fray. They pit two teams of people from their "Irish People" series against each other in a contest to see who can handle the heat the longest. The pairs eat increasingly spicy chicken wings until they arrive at 666 sauce, made with Carolina reapers, the spiciest pepper in the world.

As the final test begins, one taste tester thinks he actually likes it. "That's really nice," he says before almost going in for a second bite. "I like it. It's like doing a shot."

His eyes start to water and he gets choked up. "A painful shot," he says. Then he and his partner lose it, as you should.

There's a moral in this story and like a Jackson Pollock painting, it might look different for everyone. If the moral you're taking away is you and your friends should try Carolina reapers and film it, do yourself a favor and watch a couple more videos of people taste testing reapers.

Dustin Nelson is a News Writer with Thrillist. He holds a Guinness World Record but has never met the fingernail lady. He’s written for Sports Illustrated, Rolling Stone, Men’s Journal, The Rumpus, and other digital wonderlands. Follow him @dlukenelson.
Thrillist TV
History of