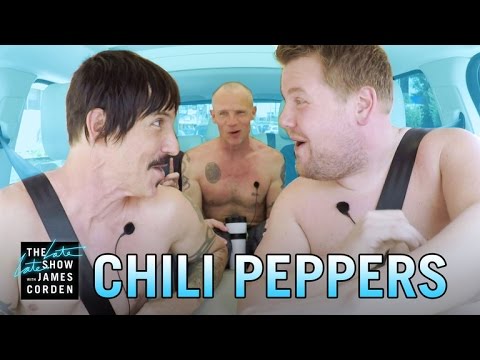 A week after James Corden's broadway Carpool Karaoke extravaganza, the Late Late Show host returned to the car with the Red Hot Chili Peppers. Joined by the full band, Corden drove around singing a career-spanning swath of Chili Peppers songs from "Give It Away" to "Dark Necessities."

But it wouldn't have been a fitting Carpool Karaoke with the Red Hot Chili Peppers unless things got a little weird, so they made it weird. Anthony Kiedis and Corden discussed "man wrestling" and challenged one another to a quick grappling match on someone's front lawn.

Afterward they hopped back in the car for more sing-alongs, which included a fair amount of Flea singing his own bass lines and guitarist Josh Klinghoffer looking a little uncomfortable. Then, three members of the quintet in the car, including Corden, went topless for "The Zephyr Song," which Corden got so into that drummer Chad Smith filmed Corden's performance on his phone from the back seat. As per usual, no one is more into this than Corden himself.

Enjoy the performance, then check our ranking of every Carpool Karaoke for a few more of the show's best group-sings.


Sign up here for our daily Thrillist email, and get your fix of the best in food/drink/fun.

Dustin Nelson is a News Writer with Thrillist. If he could Carpool Karaoke with anyone it'd be, Bob Ross with special guest Gallagher. Follow him @dlukenelson.