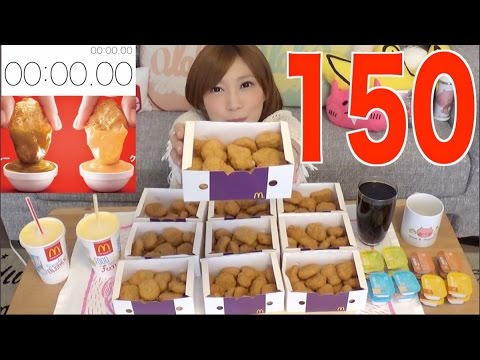 As you may know firsthand, it's not particularly hard to eat dozens of chicken nuggets in one sitting -- especially when it's 2am and you have dozens of chicken nuggets. As for eating 150 Chicken McNuggets from McDonald's in a matter of minutes... well, that's just insane, but a competitive eater in Japan makes it look ridiculously easy in a recent video.

Watch as Yuka Kinoshita, the same eating machine who scarfed down 100 slices of bread (among many other stunts), pounds 10 giant 15-count boxes of the nuggets all in one sitting. She even dips the nuggets in several little tubs of sauces like BBQ, mustard, cheese, and fruity curry, and basically makes the mountain of fried food in front of her look like a mere snack. In the end, it takes her only about 21 minutes to eat them all, and judging by her miraculous composure, she probably could have eaten more. Well, damn.

Tony Merevick is Cities News Editor at Thrillist and doesn't think he's eaten 150 of anything in one sitting. Send news tips to news@thrillist.com and follow him on Twitter @tonymerevick.
Thrillist TV
History of
The History of Tailgating