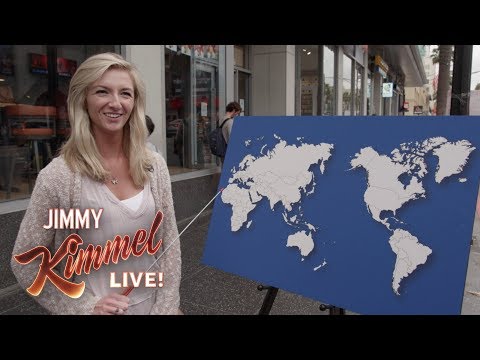 With President Donald Trump makingwavesonatrip to Europe, Jimmy Kimmel sent a crew into the streets of Los Angeles. The crew was looking for Americans willing to showcase their geographical knowledge (or a lack thereof) as American foreign relations dominate headlines in advance of Trump's meeting with Russian President Vladimir Putin in Helsinki.

"It’s imperative that America has strong relationships with and knowledge about people in other lands," Kimmel said as he introduced the segment. "That responsibility extends to all of us, not just the president. So we came up with a test. The test is very simple. We went out on the street and asked people who were passing by to name a country on a map. That’s it."

Each person was given a pointer and an unlabeled map of the world. They were then asked to name a country. Any country. It went far worse than you might have guessed even if your expectations were so, so low.

Yes, if you send a film crew into the streets and just show a handful of the interactions, you can pick ones to fit the story you want to tell. But wow, they found a lot of people who couldn't name a single country. They couldn't even pick out the United States. The best most managed was to suggest the name of an entire continent as though Asia or Africa is just a country. It was grim.

In the end, One young man saved the day. He showed a solid knowledge of countries across the world. Good job, kid. There's still hope.

UPDATE:
The show did a similar bit around Columbus Day. Watch that one from October 2019 here.