This healthy-looking pile of vegetables is called the "Clean Eating Burger." It's from KFC and it contains two halves of a large cauliflower sprinkled with chia seeds as buns. Inside, you'll find spiralized chicken, unsweetened almond yogurt, "100% British kale," and "ice cube relish." Mmm.

However, it's not a real thing.

For a brief moment, KFC pretended this publicity stunt was a real thing. The prank went deep. They didn't just create something that looks like it would be found on a foodie's Instagram feed next to #blessed, they created a guru. The burger was created in partnership with Figgy Poppleton-Rice. However, Poppleton-Rice is an actress and her social media presence is an absurd, believable ruse. 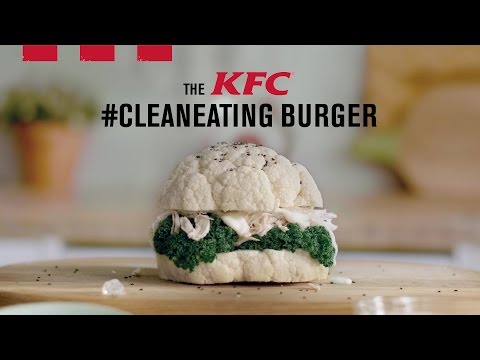 The campaign was created to promote the Dirty Louisiana in the U.K. It features a chicken fillet, three sauces (black pepper mayo, “supercharger” sauce, BBQ sauce), two layers of cheese, cucumbers, and a hash brown. It's the opposite of everything happening with the fake cauliflower king.

The campaign is hilarious and plenty of people bit.

The campaign more than implies they don't care if their food isn't healthy. In the press release, they say there is "consumer fatigue" around "clean eating," according to High Snobiety.

"Let’s get real – no one is craving a quinoa salad, lusting over a kale and celery juice, going weak at the knees for chia seeds or daydreaming about raw veg crudités," the release reads. The stance is also apparent from the fine social media life of their dear fictional Figgy.

While some were tricked, many caught on quickly. It might have been the ice cube relish that tipped them off.