Little Kid Drops Pants, Pees on the Ground During His Parents’ Romantic Proposal 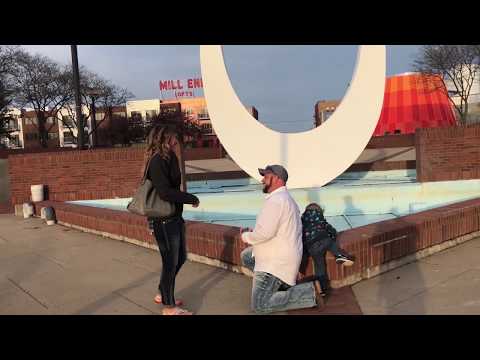 No matter how much effort and planning you put into pulling off the perfect proposal, there's no accounting for an unexpected last-minute surprise -- freak rainstorm, dropping the ring into a sewer grate, etc. -- that throws the whole thing off. Or, maybe, your proposal is totally upstaged by a little kid who just has to go pee, as one couple learned over the weekend when their son decided to drop trou and take a whiz just as their big engagement was unfolding.

Proof once again that the call of nature is rarely convenient.

What was meant to be a romantic moment quickly turned into a hilarious potty training PSA, when Kevin Przytula proposed to his girlfriend, Allyssa, during a walk around Bay City, Michigan with their 3-year-old son, Owen. While a friend captured the moment on video, Przytula dropped to one knee and popped the question near a fountain, slipping the ring on Alyssa's finger before the couple shared some tender embraces and a kiss. However, unbeknownst to either of them, Owen was in the background, pants around his ankles, peeing during the whole exchange. Needless to say, the video has already gone viral, racking up over 50,000 views on Facebook and nearly that much on YouTube at the time of this writing.

To be fair, Owen did alert his parents he was going to do what he did. "I'm gonna pee outside," you can hear him declare just as his dad goes down to kneel. Caught up in the moment, it's understandable that neither his mom nor his dad heeded the warning.

Even while the person behind the camera begins giggling uncontrollably at Owen's rogue move, the happy couple is unfazed. It's not until Przytula pulls away from kissing Allyssa that he finally turns around to realize what had just happened, and starts laughing.

Thankfully, he found the whole thing to be as funny as the rest of us.