Finally, Kinder Eggs Are Coming to the U.S. for the First Time

Due to our national concern with choking on tiny plastic objects, the wondrous chocolate egg confections known as Kinder Eggs have been long been illegal in the United States due to a 1938 law. But now, thanks to some genius tinkering with the product to finally make it compliant with safety regulations, the globally popular candies are poised to land in the frenzied aisles of your local Walmart on Black Friday.

For those uninitiated in the ways of institutionally-banned chocolate treats, Kinder's flagship product, the Kinder Joy, is a chocolate egg with cream filling that contains a small plastic toy inside. But parent company Ferrero has found a way to foil the ban on non-edible items hidden in foods by creating an Americanized version that's less likely to necessitate the Heimlich.

By splitting the egg into two clean halves -- one which contains a sealed plastic toy while the other contains chocolate, cream, and two wafers -- American Kinder Joy eggs are likely to fly off the damn shelves once they start retailing for $1.34 each. The eggs will remain on sale at Walmart exclusively for 30 days, fashioning the super-retailer a magnet for ravenous children who prefer chocolate to actual food.

In case you'd like to wade deeply into the Kinder Egg embargo, which stems from the 1938 Federal Food, Drug and Cosmetic Act, see the explainer video below: 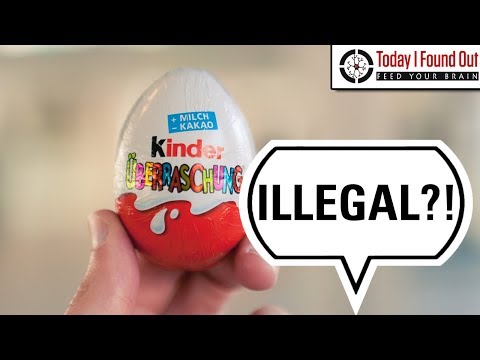 For candy fetishists who also enjoy being rewarded with small, plastic trinkets, America's Kinder Egg drought must have seemed like a glaring injustice. That's mainly because Kinder Eggs have long been available in 170 countries, making it one of the more popular candies worldwide. Putting this in perspective, there's 195 sovereign countries on the planet, meaning Kinder Eggs were on the market across 87% of the globe before the US was included.

So when you're lining up in a throng of blood-eyed and borderline hysterical shoppers outside Walmart on Black Friday, don't forget to shovel a load of Kinder Eggs into your cart.