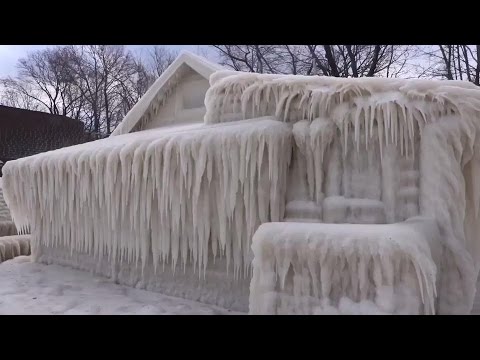 No, these are not images from the Arendelle suburbs. The east coast of the United States and Canada saw some serious snow over the weekend. It was even worse in Webster, New York, where the above home underwent a total transformation.

The house not only weathered a blizzard, but the combination of lake-effect snow, waves, wind, and sub-freezing temperatures led to a beautiful and terrifying sight. The house was completely encased in ice. Photographer John Kucko captured the bizarre occurrence in photo and video.

While it looks like the home of a demonic ice god, this kind of ice frosting along the Great Lakes isn't that out of the ordinary. Earlier this winter a lighthouse on Lake Michigan was turned into a Narnia-esque salt castle.

Similar sights have been seen along Lake Ontario as well. For instance, the below car that had to be chiseled out of its ice shell last winter, as highlighted by the Huffington Post.

The house, Accuweather notes, took five days to get into this absolutely wretched state. Lake-effect snow is a hell of a thing.

Dustin Nelson is a News Writer with Thrillist. He's looking at snow right now. Follow him @dlukenelson.
Our Newsletter